You are here: Home / Home / Carousel / ‘Every house is a classroom’: How Amani’s Block by Block program is creating change
Share this... 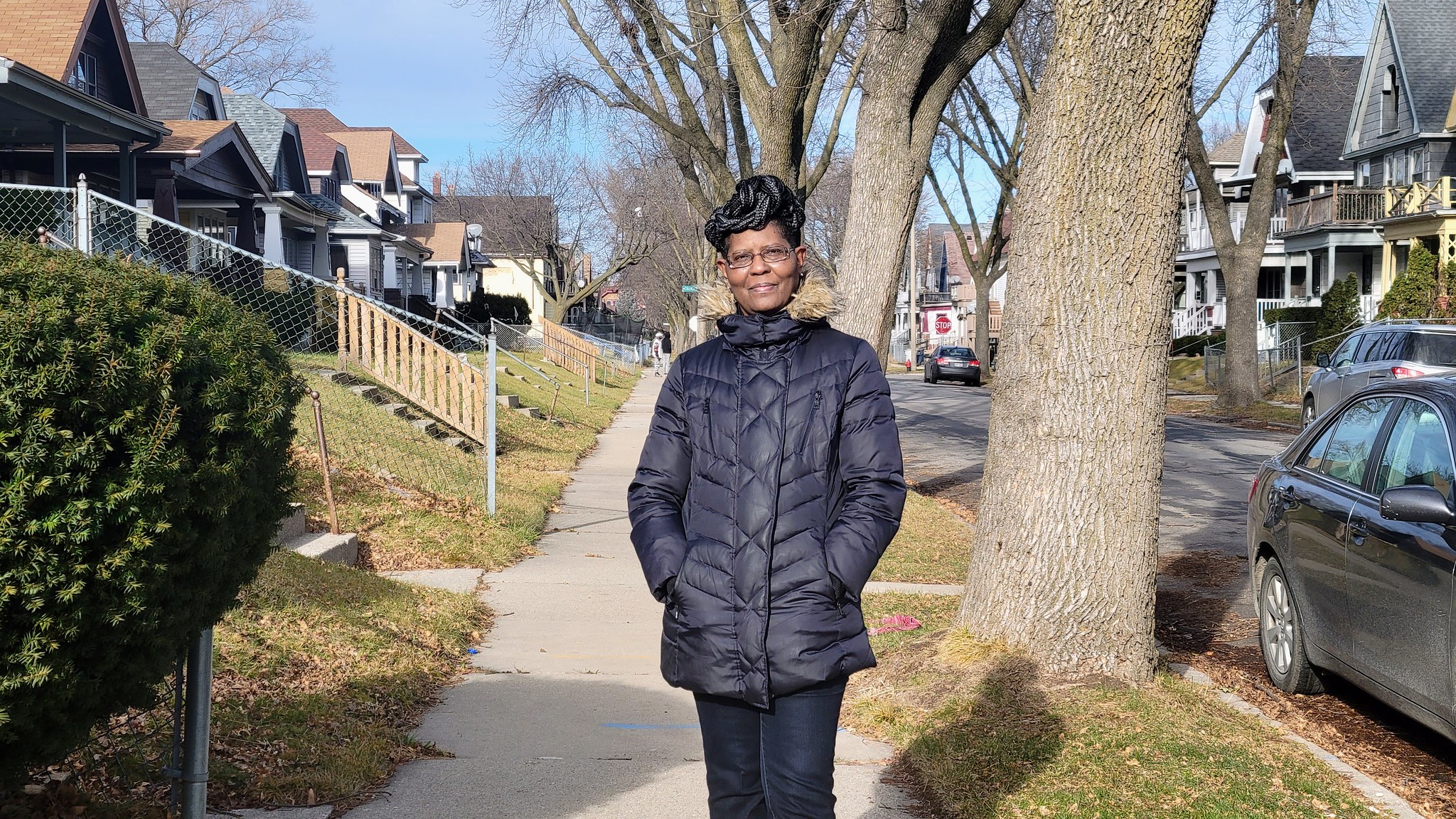 Barbara Smith lives on the pilot block and has been helping with resident engagement. “It took a while to get this off the ground,” she says. “It’s exciting to be able to walk outside and see some of the repairs that have been done.”
(Photo by PrincessSafiya Byers)

Barbara Smith has been excited to get repairs done on her home and her neighbors’ homes through her work with the Amani Block by Block program.

The program is helping Amani residents get necessary repairs done on and in their homes. But the program is doing much more. It is rebuilding and empowering community.

Smith, a former president of Amani United, a group of neighborhood residents and community partners, lives on the pilot block and has been helping lead resident engagement, along with staff from the Dominican Center, a neighborhood organization that serves as an anchor in the Amani neighborhood.

“It took a while to get this off the ground,” said Smith. “It’s exciting to be able to walk outside and see some of the repairs that have been done.”

The program is a product of the Amani Neighborhood Revitalization Plan, which seeks to help Amani residents form goals and take actions that will fuel future investment and development for the Amani neighborhood. The revitalization program was created by the Dominican Center and Amani United.

Block by Block was launched in 2019 as a strategic and resident-led way to improve housing conditions on one block in Amani, a neighborhood on the North Side of Milwaukee.

Residents have the option to participate and receive help navigating available programs from the City of Milwaukee and tapping other funds they may need to repair their homes. Members of the program go door to door and ask people if they want to sign up.

But for those implementing the program on the ground, it’s much more than that.

Smith said this process was about helping her neighbors feel safe and comfortable.

She said she would go to monthly meetings and complain about problems she was having on her block and quickly became the voice for her block.

“It doesn’t matter what it was, I would address it,” Smith said. “Then others started to bring their grievances to me so that I could address those as well.”

She said safety and issues with abandoned and unkept homes were a topic of discussion at every meeting, but once the program got up and running, resident hesitancy became an issue.

“So many people have come to Amani and made promises that were never kept,” said Smith. “People don’t just trust everyone now.”

“It is our goal to build strong relationships,” Harris said. “We worked to hammer home that we’re here to help and our partners are too.”

For those at Ezekiel Community Development Corporation, which has been completing all the construction being done, the program is about restoring hope in Amani. It moved its office and training center onto the pilot block.

“It was a form of accountability for us,” said Jim Gaillard, the vice president and main trainer of Ezekiel Community Development Corporation. “We’re neighbors now so if we don’t do what we say we will do, we have to face you every day.”

As a part of this program, Gaillard has been training both Amani residents and formerly incarcerated people in electrical work, plumbing and carpentry.

“Every house is a classroom,” he said.

“It gives people a sense of pride in their neighborhood to have participated in building and restoring it,” Gaillard said. “I think doing this work restores some hope for people who have lost it.”

Now the program is wrapping up its work on the pilot block and moving on to two more blocks in Amani.  The goal is to take the lessons they learned on this block and do even better work on the next two.

A report on the project by the Wisconsin Policy Forum, noted that members of the project learned that strong relationships with residents are difficult to build but they were essential to creating the pilot block. Block leaders must be strategic about what pots of available money they use when working with residents and when, the report said.

For Denisha Tate-McAllister, the program has been and will continue to be about the people.

“This was about figuring how we come together alongside families to make sure we all have safe homes,” she said.

Tate-McAllister has been working with the neighborhood revitalization plan since its beginning. She said she’s seen many families struggle for different reasons.

She hopes this program will be implemented in other neighborhoods and will help close the housing gap Milwaukee faces.

“This is not about housing, it’s about people,” Tate-McAllister said,

In case you missed it: How Amani’s newest ambassador Maricha Harris plans to serve community