You are here: Home / Community Voices / OPINION: We need to develop our community for our community, and I’m starting now
Share this... 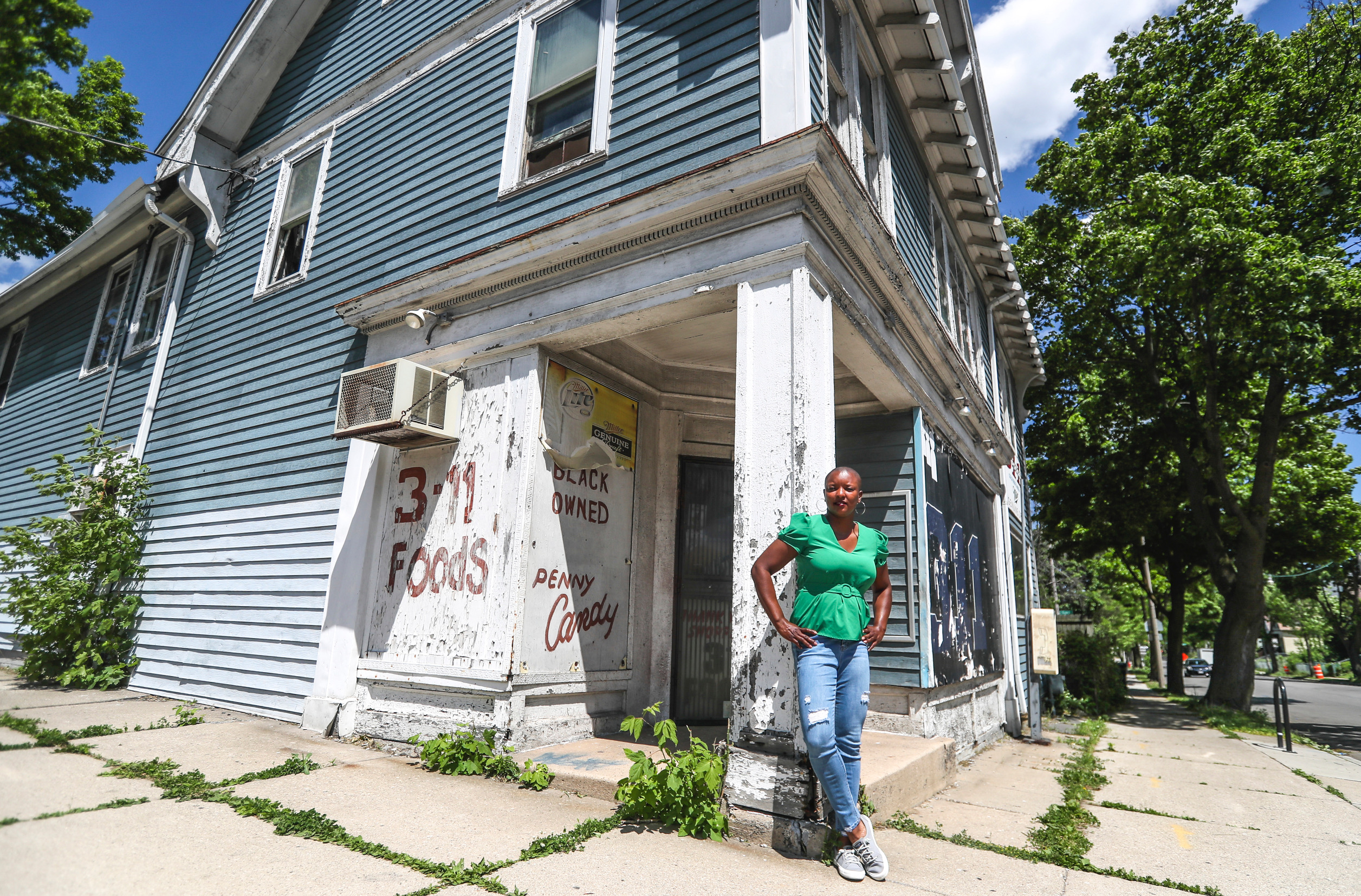 Tonda Thompson writes: “I feel the outcry of restoration from my people and the neighborhoods we reside in. The outcry of belonging is what I feel.” (Photo by Ebony Cox / Milwaukee Journal Sentinel)

I stand in a city that seems as if it has lost its soul. Yes, it is the city that’s one of the worst to raise a Black child. The same city where Black infants die nearly three times faster than white infants. The city where Black youths are the focus of nightly news and are demonized as criminals and a threat to society.

In June of 2021, the City of Milwaukee sold an old building to me that was once a corner store named 311 Foods. A store that was owned, 12 years ago, by a woman the neighborhood called “Ma.” A Black woman who provided food and nourishments to her family, as well as many other families within the Harambee neighborhood, mostly Black families.

As I stand in this same doorway, as Ma might have when she purchased this building built in 1886, I see a vision that is greater than me.

I feel the outcry of restoration from my people and the neighborhoods we reside in. The outcry of belonging is what I feel.

See, Milwaukee was once a place where thriving Black families lived. Heavily segregated before the 1970s, Black families enjoyed each other’s company and the places and spaces that were created for them to enjoy life. Much of this was dismantled by eminent domain, 1960s highway construction and “white flight.”

As I was growing up on 13th Street, in the early 1990s, there were still white families on the block where we lived. The white family across the street from our family home lived there for years along with my family. All of the families knew each other well and there was a sense of community on the block. As years went by, homes were sold, and unfortunately, elders passed on. Along with their passing, so did homeownership and the sense of community. Along with homeownership, businesses faded as well.

In late January of 2022, I made a social media post with a vision of having a Black Wall Street, similar to the one in Atlanta, Georgia. Yes, I know — we have the greats like Bronzeville Collective and Sherman Phoenix, but I had a larger vision. This vision caught the attention of many city leaders and a host of likes and comments.

The post was an “if I could, I would” statement. I dreamed about restoring the remnants of Northridge Mall. Yes, I do know the annoying politics behind the building. The fact stands that Northridge Mall, built in 1972, was not created by or for the current culture of Milwaukee. The same goes for Capitol Court, which was built in 1956.

These entities, in my opinion, were designed for families that engaged in “white flight.”

In the 1980s, Black people expanded across the heart of the city and enjoyed walking to Capitol Court to purchase the latest fashion. However, we were not given the opportunity to keep up with the developments that were designed by another culture.

In the 1970s, 1980s and 1990s, my generation had access to skating rinks, malls, movie theaters, theme parks (Bonanza was SO DOPE!), merely because the people who those amenities were designed for were still the majority of the population of Milwaukee. I believe my generation witnessed the fall of these entities because they were not developed for us, and we were offered limited opportunities to maintain them.

Here I stand, with my Black son, who is turning 5 years old in March. Jehlani’s only option for a fun space for kids to gather does not exist within the City of Milwaukee. There are no spaces designed for him within the heart of the city to be free and be the kid that he needs to be. This is the same for his generation and the generation before him.

When they were developed, Northridge and Capitol Court were created by the people who lived in Granville and Midtown for the racial demographics that lived there at that time. It’s time for us to develop our own and stop waiting.

Here I stand with my son, my family and the hopes to restore future of the city of Milwaukee.

Tonda Thompson is a model turned community advocate and developer who aims to reduce social determinants of health within cities with large BIPOC populations across the nation.