You are here: Home / Home / Carousel / ‘It has been set back years now’: Free calls to those who are incarcerated hits a snag in Milwaukee County
Share this... 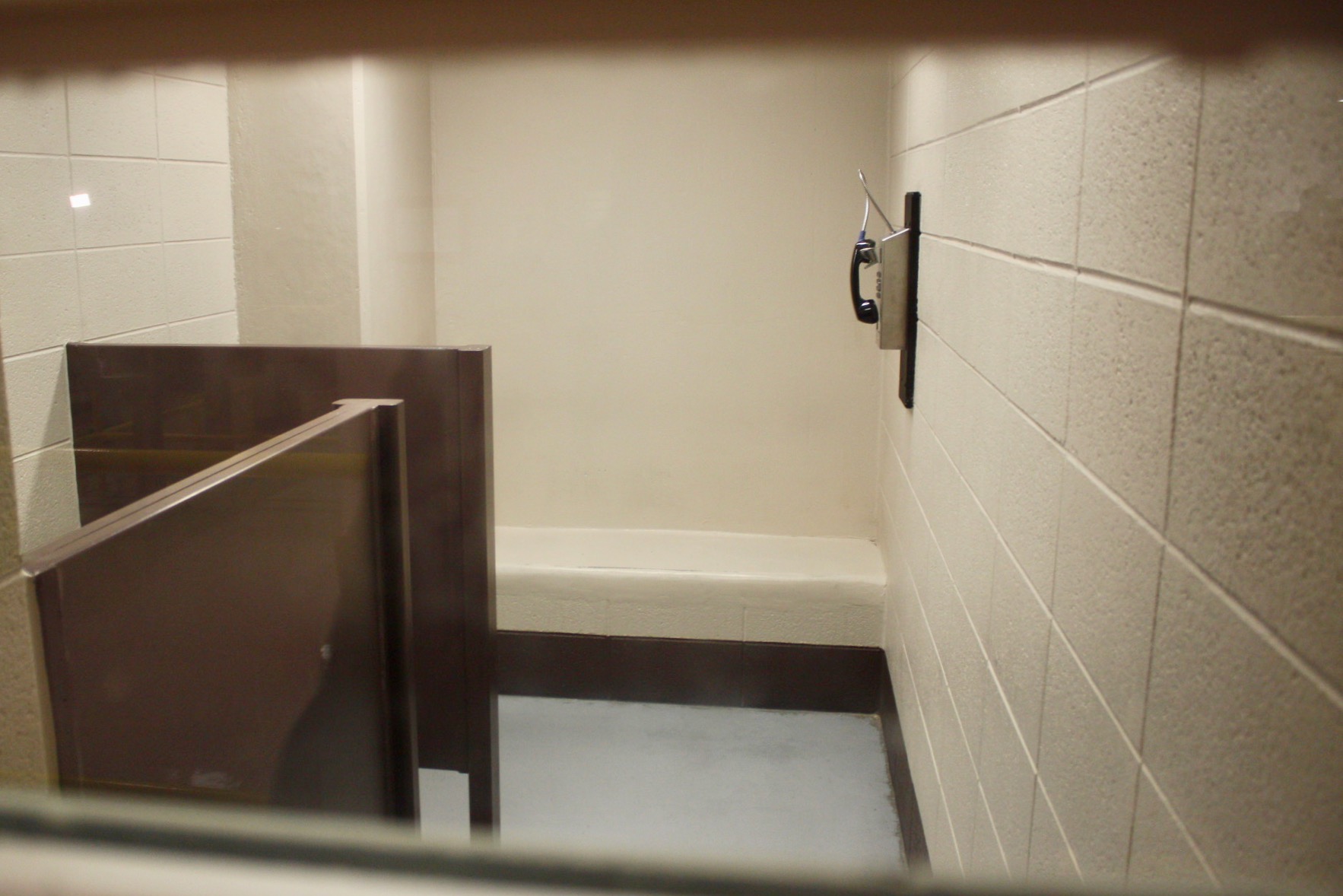 One of the private rooms that line the county jail’s booking room has a phone and a toilet. (NNS file photo)

This story has been updated to correct an error. The plan involves free calls for those incarcerated in Milwaukee County facilities, not the Milwaukee Secure Detention Facility, which is state-run.

This move, proponents of the free calls say, is prolonging an undue burden for families already struggling financially. And the action has, they say, the earmarks of balancing the county budget on the backs of those least able to afford it.

The plan had been for free or reduced costs for phone and video calls to those who are incarcerated. Amid budgetary concerns, those plans were recently placed on hold by the Milwaukee County Board of Supervisors.

An amendment passed by the Board of Supervisors in a 12-5 vote on Feb. 3 called for officials to gather more information and report back on how to best structure a proposal to efficiently provide free or low-cost calls and to look more closely at the plan’s potential impact on the budget. That plan is due before the board by July.

Elizabeth Brown, an activist with Justice Wisconsin, a civil and human rights advocacy group, said she’s fed up with a system of incarceration that takes advantage of Milwaukee families, especially Black and low-income families. Key among their struggles is maintaining communication with loved ones because of the high cost of phone and video calls from the Milwaukee House of Correction and the Milwaukee County Jail.

“It causes extreme hurt to a family that was already struggling prior to their loved one being caught in the system to not have the ability or the money to talk to them,” said Brown, adding that on-site video visitation was suspended due to COVID. “Those calls help families maintain crucial connections and support each other.”

Katelyn Harvey said her loved one is serving an 11-month sentence at the House of Correction. She said paying to maintain communication with him has been difficult.

“Having to pay bills has been a struggle the last couple months,” she said. “But talking to a loved one is so important because it gives these people that are in the House of Corrections and in the county jail hope.”

According to a fiscal estimate conducted by Worth Rises, a national nonprofit that advocates for the dismantling of the prison system, Milwaukee families spend $5.1 million a year on phone and video calls from jail, a portion of which goes to the county.

These calls cost 21 cents per minute for phone calls and 41 cents a minute for video calls. Brown said she’s outraged that a resolution that would have provided free or low-cost calls to those housed in Milwaukee County facilities hit a major roadblock that could delay changes for years.

That plan, which Clancy said he’d worked for 13 months on, was initially supported by the Board of Supervisors but was amended due to concerns about its impact on the budget.

Clancy acknowledges those concerns but said a national nonprofit, Ameelio, a communications and educational technology company, agreed to donate free video calls. He said its administration fee is around $70,000 and added that the total of $600,000 needed to implement the plan was already available in the budget.

“We are gouging families and generating a lot of money for the county and it’s absolutely wrong,” he said.

Fellow County Supervisor Shawn Rolland introduced an amendment to the resolution that Clancy said “kicked the plan down the road.”

Rolland said he’s also against balancing the budget through fees charged to low-income and communities of color.

But, he said, Clancy’s plan blows a big hole in the budget with no plan to fill it.

“His proposal didn’t explain the budget costs,” which Rolland said would have been more than $4 million. “It doesn’t include the extra staff that we would have to have on board to manage the calls and the safety of the jail.”

Without more time, the plan would have been doomed, he said.

“We can be a national leader if we get this right,” he said. “If they see us tripping up or making promises that we can’t keep, it won’t create systemic change.”

Other cities, including New York, San Diego and Louisville, have already made phone calls free for inmates. There also is a national push to federally regulate the cost of calls for prisoners. The Martha White Prison Phone Justice Act would require the Federal Communications Commission to establish maximum rates that providers could charge for those services and set caps in the interim.

While that legislation languishes in Congress, there’s still the matter of the county needing to balance its budget, with many of its departments struggling. Milwaukee County Parks, for example, has about $500 million in deferred maintenance projects, according to Parks Director Guy Smith.

Another challenge to moving toward free or low-cost calls is that the county supervisors recently approved a new three-year contract between the county and Inmate Calling Solutions, referred to as ICSolutions, the company that currently provides the phone and video services.

That contract guarantees the county a minimum annual payment from the firm to the county of $2.036 million and an additional $100,000 annually to cover the cost of a county employee to provide onsite administration of the communication system.

The company will also pay a one-time supplemental incentive of $425,000 to the county. The county has three one-year renewal options for the plan once it expires or it can renew it on a month-to-month basis. Exiting the plan early would result in a fee, according to Rolland.

The current resolution still offers a commitment by the supervisors to lower the cost of phone and video calls each year to free or an amount to cover reasonable costs. Clancy has limited hope that it will happen anytime soon.

“We were set to take immediate action, but it has been set back years now. It’s unconscionable,” he said.