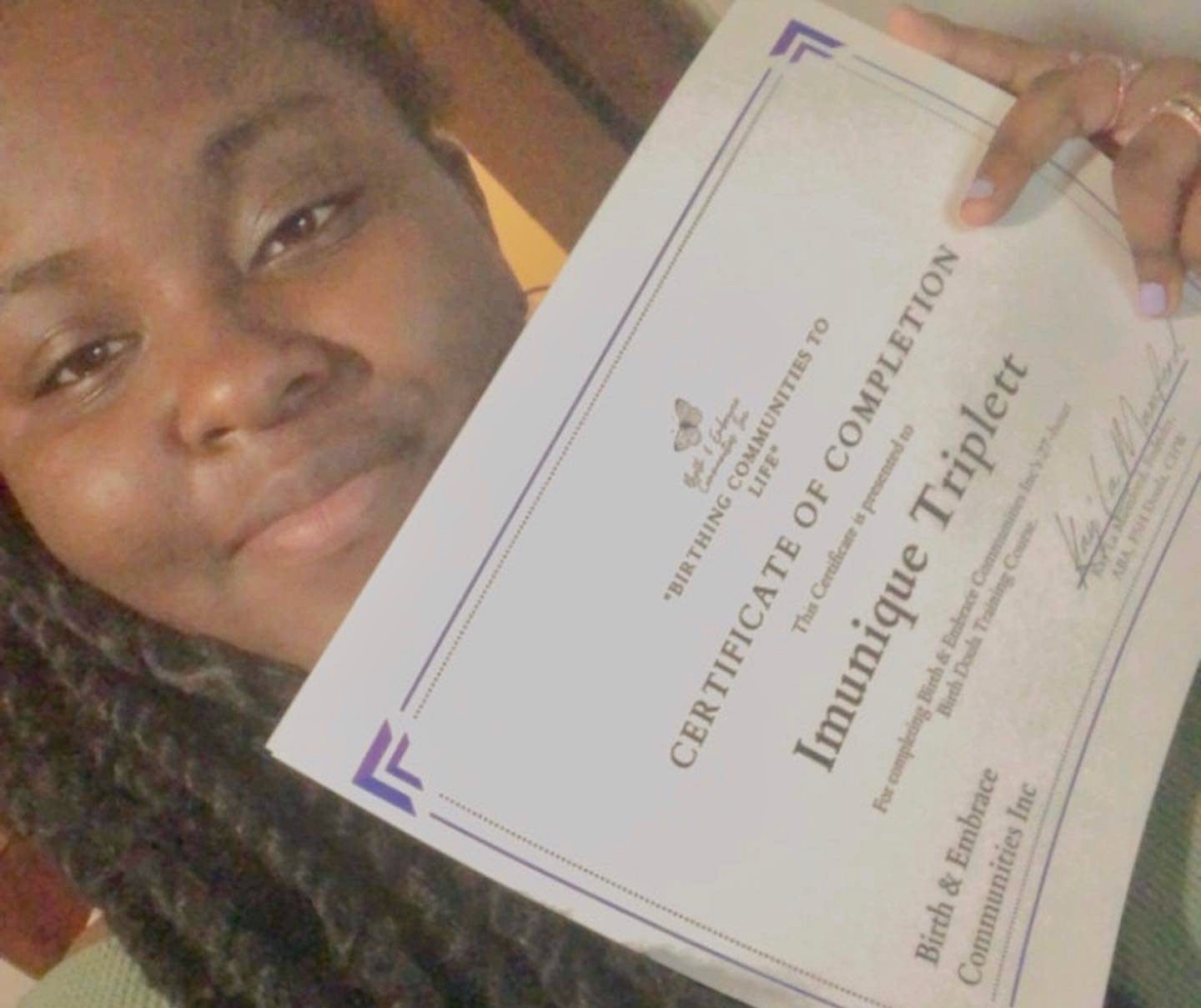 Imunique Triplett hold her doula certificate, one of her achievements. She is close to earning a nursing license before graduating from high school. (Photo provided by Imunique Triplett)

Imunique Triplett is steps away from getting her nursing license, and she hasn’t even graduated from high school.

The 17-year-old, who plans to graduate from Rufus King High School in May, has a head start thanks to the M3 (M-Cubed) College Connections Program.

This is a free program in which Milwaukee Public Schools collaborates with the University of Wisconsin-Milwaukee and Milwaukee Area Technical College to allow students to earn college credits toward a degree while still in high school.

In the Nursing Pathway component of the program, students have the potential to earn their state certification as a nursing assistant and possibly their license as a practical nurse.

Triplett found herself facing a critical decision when weighing whether to pursue entry into the program.

She knew she would be giving up much of her normal high school experience if she enrolled. And she felt she wasn’t ready for college life. But she swept aside her reservations and started the program at age 15. Two years later, she earned her practical nursing degree on Dec. 17.

The program recognizes that nurses are in high demand in Milwaukee and other communities.

But Sokolowski said, aside from launching students onto a degree and a career, the program strengthens the partnership between MPS, UWM and MATC.

“The program grew out of the intention to work together,” he said.

Sokolowski said that students are required to fill out an application displaying their interest in the program. Then a committee of MPS, UWM and MATC staff reviews the applications and analyzes students’ grades, transcripts and course selections.

The students who are chosen are notified at the end of their sophomore year, and their courses begin in the summer of their junior year.

“We want students to be successful and high performing, but we also don’t want to shut out students who might have had some struggles along the way,” Sokolowski said.

It took Triplett, who is the second youngest of five siblings and was born and raised in Milwaukee, two years to complete the program. She described it as rigorous and containing little room for error.

Caught between high school and college, the time commitment between the two varied. But college ultimately demanded more attention.

Triplett loves to read for pleasure, but during her college studies, she buried herself in flashcards and medical books.

Triplett said her last semester was the hardest, and it took a toll on her mental and emotional health. She said she would go two weeks without self-care.

Initially, she felt intimidated while taking nursing classes at MATC because she was the youngest of her classmates. Many of them had children, were married and had 15 years of field experience.

She said she had no clue that nursing would be in the picture for her because she was frightened by many aspects of the field.

“I didn’t want to encounter blood, death and the things I saw illustrated on TV,” Triplett said.

Triplett is studying for one more exam called the NCLEX-PN, which is a state licensing exam that comes after getting the practical nursing degree. That’s scheduled for April 19. For now, she’s into practical nursing. But ultimately Triplett wants to be a registered nurse who specializes in obstetrics.

She’s also looking at being a midwife, and she’s already obtained a doula certificate that enables her to assist with the mental well-being of women in labor.

Whitney Bingham, who is Triplett’s mentor at Running Rebels, a youth organization in Milwaukee, encouraged her to do the doula training through Birth & Embrace Communities because she knew of her interest in moms and babies.

Bingham said, “Imunique is the ideal mentee to have. She is coachable, driven and always has the willingness to set and accomplish goals.”

Bingham completed the doula training herself. She said the training is only 30 hours and has no age restriction.

“I had no idea that I would be graduating before high school with a college degree,” Triplett said.

Triplett now works as a caregiver and is undecided about whether to attend New York University or Marquette University after graduating from high school.

During the summer, she will be applying for an apprenticeship with the ROADS program, associated with the Medical College of Wisconsin. ROADS stands for Research Opportunity for Academic Development in Science, a program that gives high school students experience in research laboratory settings.

Triplett was the youngest in her M3 cohort, Sokolowski said. “She’s the trailblazer of the program,” he said.

Triplett said her friends and family are proud of her achievement.

“We definitely cried about it,” she said.

The application period for the M3 (M-Cubed) College Connections Program for 2022-’23 is now open for interested students. The deadline for the Nursing Pathway component of the program is March 24.