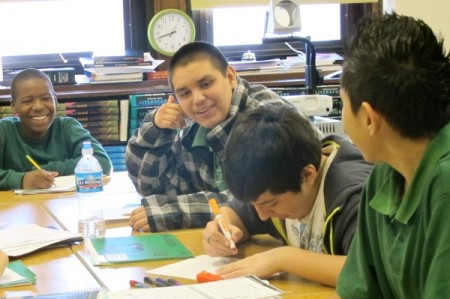 Greenfield Bilingual School, like the other six schools in the study conducted by Milwaukee Neighborhood News Service, is having the greatest success with a subset of students: those who’ve mastered two languages.

Ninety-three percent of Greenfield’s 373 students are Hispanic, and 43 percent are classified as ELL.

As Maria Sanchez, longtime principal at Greenfield put it, eventually most ELL students will “break the code” and enter all-English classrooms if they choose to do so.

No single reason explains the difference in achievement levels between ELL and non-ELL students. But according to Maria Gonzalez-Nunez, who teaches fourth grade at Greenfield and has been at the school for 10 years, the main reason is the rigorous curriculum and standards that ELL teachers set for their students in order for them to maintain fluency in both languages.

“We have a very hard-working staff here and we make sure to articulate to the kids that they need not just to be bilingual but also not to be choppy and speak the languages clearly,” Gonzalez-Nunez said.

Gonzalez-Nunez teaches in room 32C, surrounded by 18 smiling faces. On this day she is teaching reading lessons in Spanish. She focuses on seven principles: comprehension, fluency, phonics, spelling, grammar, vocabulary and writing. Next week she will teach reading in English.

Gonzalez-Nunez teaches math a little differently than reading. She spends the first half of the year teaching math in Spanish and the second half teaching it in English. She says that her teaching schedule is based on guidelines set by the district.

One of the many challenges she faces is having students of all English proficiency levels in the same classroom. She points out one child who is newer to the country and the language than most of her students.

He’s picking up the language quickly, said Gonzalez-Nunez. “He’s beginning to communicate more and talk to his peers in English,” she added.

Like Gonzalez-Nunez, 6th grade teacher Luis Lopez said that he spends countless hours preparing lesson plans that accommodate students of varying levels of English proficiency, including some who were born in the U.S. but speak Spanish at home and others who have just arrived from Mexico or the Dominican Republic.

Lopez, who was born in Puerto Rico and has taught at Greenfield since 2000, has a teaching degree and bilingual certificate from Carroll University in Waukesha, with a master’s degree in administrative leadership from UWM.

“This year budget cuts have left me without a helper most of the time, so I teach all subjects; I literally feel like I split myself in ten,” Lopez said.

“There is no magic solution,” he added, “but if the parent gets involved you can take giant steps towards helping a student become proficient.”

But there is no way to control what happens outside of school. For example, poverty and parents who are unable to help their children add to the challenges, said Gonzalez-Nunez, who was born in Mexico, as were her parents.

“I know the feeling of not being able to be helped at home,” she said.

Greenfield offers English classes for parents of its students.