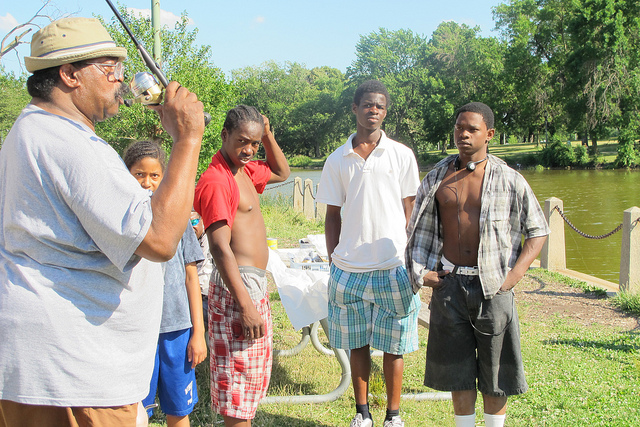 For the first time this year, the Hunger Task Force has leased the former Milwaukee County Fish Hatchery located on a 150-acre farm in Franklin.

Hunger Task Force has operated the farm since 2002 in partnership with Milwaukee County. In 2007, Hunger Task Force signed a 10-year lease with the County that included the farmland, machinery and some buildings, but not the hatchery.

The County’s 2012 budget called for the closure of the hatchery in the spring of 2014, after all fish were released. The budget also directed the Parks Department to “seek out potential entities that would be interested in assuming full responsibility for the Fish Hatchery operations from the County.”

E.B. Garner has been teaching kids to fish at Washington Park Pond for 15 years, since promising a neighbor boy he’d teach him if his grades and behavior improved. What started as a group of 12 grew to 400 during Wisconsin’s annual Free Fishing Weekend in early June. Read More

E.B. Garner has been teaching kids to fish at Washington Park Pond for 15 years, since promising a neighbor boy he’d teach him if his grades and behavior improved. What started as a group of 12 grew to 400 during Wisconsin’s annual Free Fishing Weekend in early June.

So, this year the lease was renegotiated to include all of the buildings and the hatchery. “The renegotiated lease stipulates that the Hunger Task Force continue the hatchery’s mission of stocking fish into Milwaukee County parks,” said Mueller.

The fish are safe to eat, as long as consumers follow the Department of Natural Resource’s safe-eating guidelines for Wisconsin’s inland waters. These indicate the recommended monthly limit of different kinds of fish for women, men and children.

The hatchery is a year-round operation. Community members are able to tour the hatchery to see fish spawning, incubating and hatching. Fish also are donated to the Milwaukee County Zoo, the Department of Natural Resources and Discovery World for use in educational displays.

Mueller, who grew up fishing in county ponds, touted the social and economic benefits of fishing, noting that it encourages family bonding, keeps kids out of trouble and generates revenue for fishing-related businesses.

The Department of Natural Resources determines fishing regulations. The number of fish people are allowed to keep per day are posted at the lagoons. All anglers are required to have a fishing license and inland trout stamp, except youth under 16 and Wisconsin residents born before Jan. 1, 1927.

Each year, the state has a Free Fishing Weekend, and people of all ages can fish without a license, although other rules still apply. This took place the first weekend of June.

“The kids are really what this is meant for,” said Department of Natural Resources urban fisheries biologist Matt Coffaro. 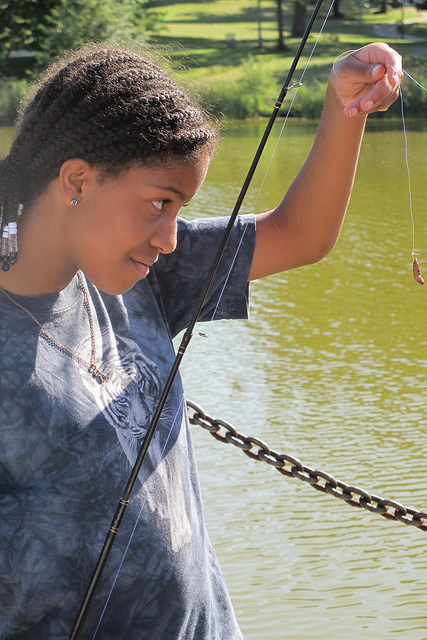 Ajalae Adams, 12, takes a look at her bait as she learns to fish at the E.B. Garner Fishing Club at Washington Park Pond. (Photo by Jennifer Reinke)

And, the parks are a particularly good place for them to start fishing. Kids, said Mueller, “will get [their] feet wet but won’t drown.”

At E.B. Garner’s Fishing Club, youth learn the basics, from water safety to baiting a hook and casting, at Washington Park Pond just outside the Urban Ecology Center.

Before investing in expensive equipment, said Garner, “I encourage all parents to see if [their kids] show any interest.”

In addition to Garner’s club, youth can learn to fish at annual clinics hosted in 11 Milwaukee parks in April, in collaboration with volunteers from the Wisconsin Council of Sport Fishing Organizations and the Department of Natural Resources. There are also several ice fishing clinics in Milwaukee and Waukesha Counties.

Plenty of residents take their catch home to eat.

“Our [hatchery] fish are definitely safe and I would guess that whatever wild fish are in there are safe also,” said Mueller. This includes hardier fish such as bullheads, catfish and carp.

Both chemicals are accumulated through the food chain, which isn’t a problem because there are no large predators in urban park ponds, according to Coffaro. Moreover, he said, “stocked fish aren’t there for a long enough time” to accumulate harmful levels of pollutants.

Although Coffaro said that there generally is not a problem with contaminants in urban park ponds, the Department of Natural Resources does water quality testing where problems are suspected. Jackson Park Pond is known to contain PCBs so it is not stocked with fish.

At Washington Park Pond, Glen Grieger, a volunteer naturalist with the Urban Ecology Center, has done his own aquatic organism sampling. He said he found “biological diversity and indications of a healthy ecosystem.”