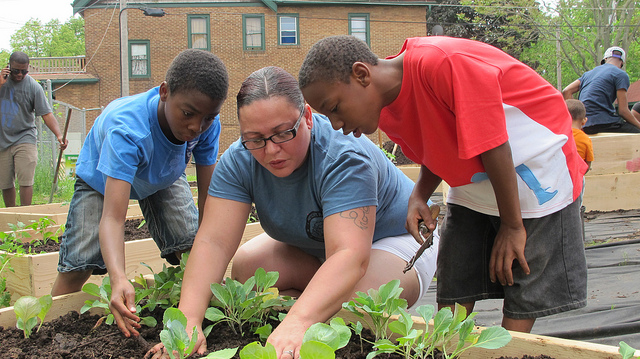 “As a chess player, I’ve learned that the center is the most critical position on the chessboard,” Caston said.

Neighborhood residents have been working hard for the past year to heal Metcalfe Park, which has been hit hard by crime, the recession and foreclosure crises. On Wright Street, between 28th and 29th, more than half of the houses have been boarded up or torn down.

That’s one reason why MPCAT chose to build a community garden on the block. The new garden also is across the street from the Dr. Wesley L. Scott Senior Living Community. The Clarke Street School is just a block away. 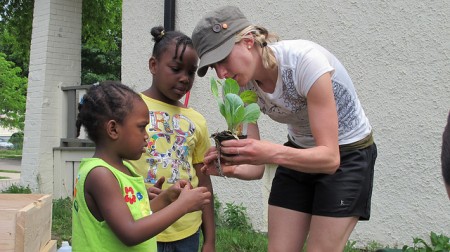 (From left) Mariyah and Keira Pressley-Smith and Sara Bauer, a Metcalfe Park coordinator for the Building Neighborhood Capacity Program, plant cabbage in the new community garden. (Photo by Andrea Waxman)

“We want to bring our seniors back into the neighborhood. We believe that they bring peace and that they can teach,” said MPCAT member Danelle Cross.

MPCAT grew out of the efforts of the Building Neighborhood Capacity Program (BNCP), a White House project to support and strengthen neighborhoods by empowering residents. The garden is the latest in a series of activities and events MPCAT has initiated since it came together a year ago.

“We want our community to be healthy and vibrant and strong and economically stable. We figured putting in a garden would be a good way to teach people to grow their own fruits and vegetables,” and not only give them access to healthy food but also an opportunity to come outside and get to know each other, said MPCAT President Duril White.

MPCAT’s vision for the community includes serving people with disabilities and seniors, and connecting them with the neighborhood’s youth, Cross said. The garden was designed to accommodate people in wheelchairs.

“We’re going to use this place for a social gathering place,” added Cross, who with Sara Bauer, coordinates the Metcalfe Park neighborhood BNCP.

Joining residents who ranged from toddlers to wheel-chair bound seniors, were staff and volunteers from Milwaukee Urban Gardens, and Young Farmers of Milwaukee, two programs of Groundwork Milwaukee, and Children’s Hospital of Wisconsin.

On a weekday evening and a Saturday afternoon, the group built garden bed frames out of wood, filled them with rich soil and planted tomatoes, onions, cabbage and other vegetables. White, a private chef and caterer, provided lunch cooked on site.

Plans for the garden include cooking and juicing demonstrations, healthy eating classes, canning and an outdoor movie night, among other activities.

Caston, an artist, signed up the children to come back and decorate the wood frames with their handprints “to signify that this is their work,” he said. He plans to dip their hands in florescent paint that will glow in the dark.