Usually it takes six to eight months to plan, design and build a playground. But a collaborative effort among residents and organizations made the dream playground designs of about 17 kids from the neighborhood come true in about a month of planning. The building of the actual playground took close to three hours.

In mid-August, children and their parents were asked what their dream playground would look like. The results were compiled and designers got to work. 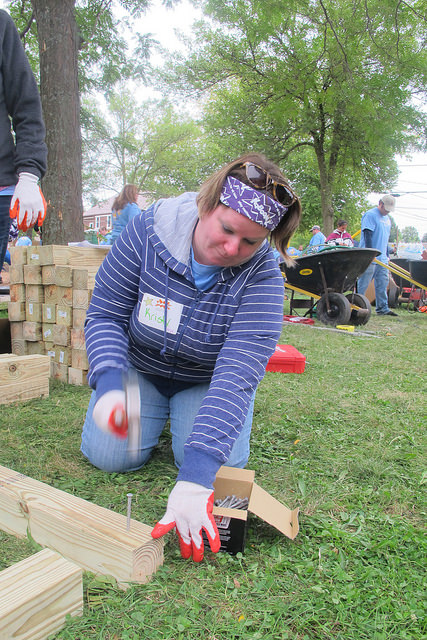 And on a recent Thursday morning, more than 100 residents and volunteers went to 117 E. Keefe Ave. to rebuild the rundown Harambee Tot Lot.

“When I saw them (City of Milwaukee) tear down the old (playground), I was shocked because I watched kids play over there. I called my alderwoman, Milele Coggs, and she kindly called my house and told me that they were building a new one. Then I was excited,” said one 40-year resident of the neighborhood who declined to give her name.

The Harambee Great Neighborhood Initiative, RiverWorks Development Corporation, and the Milwaukee Police Department are working to keep the Keefe Avenue Corridor in a condition that “improves the quality of life and atmosphere,” said Adrian Spencer, a Harambee resident and community support specialist for RiverWorks.

Other improvements have included additional lighting and volunteer block captains. Community pressure shut down a nearby nuisance bar that had been the subject of resident complaints.

“There was a need for a playground in this neighborhood and this aligns with our mission, which is to promote education, youth leadership and wellness in the communities where our associates live and work,” said Leslie Parpart, manager of the CarMax Foundation.

Based in Richmond, Va., the foundation is on track to build 30 playgrounds across the country in the next three years. The Harambee Tot Lot is its 13th build so far.

Brittany Powell, a volunteer and CarMax employee, said she spent a considerable amount of time at the old playground as a kid, since her aunt owns a home in Harambee. She said she thinks it’s great that people from different states came to build a playground for the youth.

The word “Harambee” is Swahili and means “all pull together.” Community members and organizers hope the collaborative effort to build the playground is just the beginning of “great things to come” and a way “to keep the momentum moving to effect change,” said Spencer.