Standing on the sidewalk of a busy block in the Amani neighborhood during a sunny summer day, Ariana and her cousin had a lot to talk about. The 9-year-olds chattered about school and boys, but the foremost issue on their minds that day was gun violence.

“I’ve lived everywhere around the ghetto, and I like [living in Amani],” Ariana said. “But I don’t like when they shoot. I like Amani because it means peace and I want peace in our neighborhood.”

The two girls were among a large group of community members who gathered at 23rd and Chambers streets recently for a block party raising awareness about gun violence in the neighborhood.

Lewis Lee, outreach coordinator at the Milwaukee Fatherhood Initiative, was one of the organizers. Lee explained that the purpose of the event was to bring members of the Amani community together and show the good that the neighborhood has to offer. 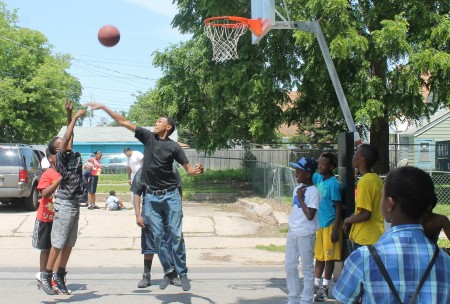 A group of boys plays basketball at the Amani block party. (Photo by Madeline Kennedy)

“This is one of the hardest hit neighborhoods as far as crime,” he said. “We’re trying to change the stigma that we’re all bad and nothing good happens in this neighborhood. There’s a lot of good here that people don’t see.”

In recent years crime in Amani has dropped dramatically. Earlier this year, COA Youth & Family Centers released a report stating that crime in the area has dropped 32 percent since 2013. Executive Director Tom Schneider credited the reduced crime rate to a “comprehensive community effort” by residents and community organizations.

Many of these organizations came out to show their support at the block party. One of the most popular attractions was a table of chessboards set up by a group called Art & Cultural Chess Educated Super Society (ACCESS). ACCESS CEO Quan Caston has been playing chess for more than a decade and explained that the game can improve a child’s critical thinking skills.

“It’s something very constructive for them to learn even if they never become teachers or grandmasters,” Caston said. “The analogies and strategies are all there in the game. We want them to think like chess players when they’re making decisions in life.” 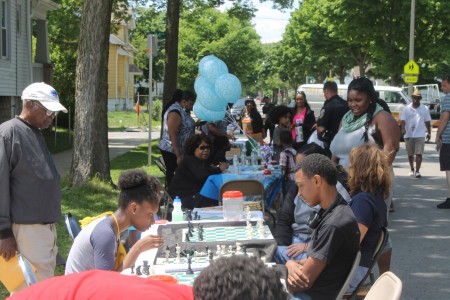 Amani residents play chess at a block party on Chambers between 23rd and 24th streets. (Photo by Madeline Kennedy)

Billy Trammell of Phenomenal Men Support Group brought one of the block party’s more eye-catching attractions: a small cargo trailer fashioned into a jail cell. Complete with prison bunk bed and toilet, Trammell said the intention of the built-to-scale prison cell is to discourage kids from crime and instead pursue an education.

“The kids these days see a lot, but they don’t see any good role models,” Trammell said. “They see their uncles and their brothers out here smoking blunts or selling dope and that’s what they’re going to become. But we want to teach them that eventually that’s going to wear out and not lead them to a good place.”

Many of the community members in attendance have been personally affected by gun violence. Lee said he lost two friends and on one occasion was shot five times. Standing in the middle of the street at 24th and Chambers, Lee added that his brother was shot on that very block when he was 18.

“Losing so many people back in those days made me want to turn things around for the kids today,” Lee said. “This neighborhood is real sentimental to me because I lost so much, but it also helped me gain so much. It led me to the work I’m doing now because I used to be part of the problem. Now I’m part of the solution.”