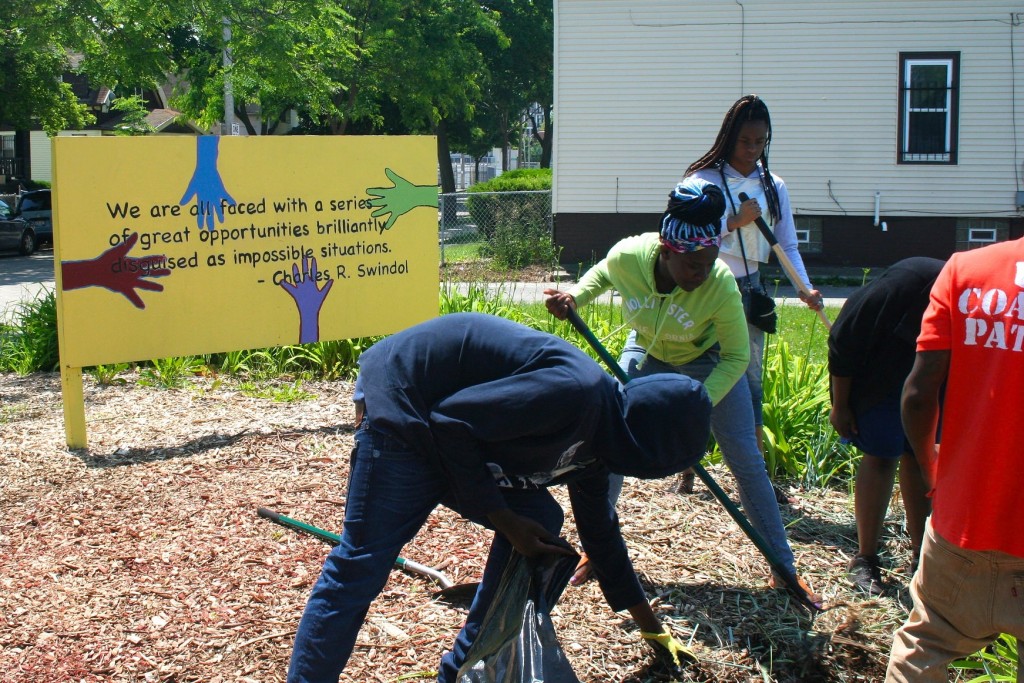 Cleveland Easley and other students work at a pocket park on 19th Street and Meinecke Avenue. (Photo by Jabril Faraj)

Cleveland Easley works to uproot a weed at a pocket park on 19th Street and Meinecke Avenue under the hot, midday sun. He gathers the leaves in his hands and pulls; they break. Easley comes back with a shovel to get the rest.

Easley is one of 200 youth being employed through the Clean Summer Youth Program, an expansion of the Earn & Learn summer work program. The new program is putting youth across the city to work for six weeks with the goal of cleaning up Milwaukee communities and reducing crime. Program participants were selected from a wait list for the Earn & Learn program, which has operated since 2005 and served more than 3,000 youth last year.

“I made my restrictions loose,” said Ald. Russell Stamper. “As long as you’re 14 and you’re in school and you want to work … no child should be turned away, if they take the initiative [to apply].”

Stamper said he created the program, which started July 1, on a short timeline as a result of a spike in violence this spring. Mayor Tom Barrett responded to the rash of homicides by allocating $2 million of unspent 2014 Milwaukee Police Department funds to increase the number of officers on the streets. Stamper was not against increasing the presence of law enforcement but said he also wanted to “develop a program to not just react to crime but prevent crimes.”

“The way you reduce crime is you employ people,” said Stamper, adding that another goal was to strengthen relationships with city churches.

Grace Fellowship Church of Milwaukee, Neighborhood House of Milwaukee, Running Rebels, Journey House and the Urban Ecology Center are all participating in the new initiative.

Neu-Life Community Development, which operates the park at 19th and Meinecke, has employed youth through the Earn & Learn program for seven or eight years, said Director Jody Rhodes. Neu-Life was planning to get about 20 youth but learned in late May that about 10 more would be coming through the Clean Summer program.

Stamper acknowledged the program was put together “very last minute” but Rhodes said she is happy to have more youth. “That’s 10 more kids off the streets doing positive stuff so we couldn’t say no.” 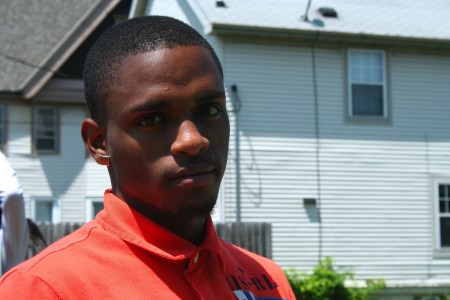 Jaquawn Seals, 21, started working with Neu-Life Community Development at 15, which inspired him to change his life. (Photo by Jabril Faraj)

Jaquawn Seals is a full-time employee at Neu-Life who supervises a group of about a dozen students working at the pocket park. Seals, 21, who went to jail as a teenager for riding in a stolen car, described himself as “a troubled kid.” Then, when he was 15, Seals got a call from someone at the Milwaukee Area Workforce Investment Board (MAWIB), which runs the Earn & Learn program. He’s been working with Neu-Life ever since.

“I was involved in gangs and I used to get into fights a lot, get suspended from school a lot, things like that,” said Seals, who didn’t have a father figure in his life. “I came [to Neu-Life] and they showed me something different, other than the neighborhood I was used to. It made me want to change my life.”

Kahala Burks, 16, who has three younger sisters, has enjoyed the opportunity to play with young children at Neu-Life’s Wellness Wednesdays, an aspect of the summer program that brings different age groups together. Burks said it feels good to have a hand in changing her environment.

“Some of these kids out here are without a family — some of them grow up without a dad or [with] a dad in jail or their momma died at an early age,” said Burks. “You don’t ever know what other people are going through.”

For many of the youth, this is one of their first jobs, an opportunity to learn and gain valuable experience. Seals said work helped him become more positive and stay out of trouble because he doesn’t “have to think about doing bad stuff to get money.”

Kendric McMillian, 16, is expecting a baby in August. McMillian, who worked “from time to time” at his uncle’s grocery shop last summer, said even though the pay was pretty good — he got $8 an hour — he needed work that was more steady to meet the needs of an infant. Program participants are paid $7.50 an hour for 20 hours per week.

“She’s gonna be in my pockets,” said McMillian. He is applying at Culver’s and hopes the experience from working over the summer will help him land the job. McMillian also said he would be interested in working toward a part-time position at Neu-Life.

Rhodes stressed that even though Neu-Life participates in the summer work program, it also provides opportunities for youth year-round “to help them sustain some sort of independence during school time.” She said a third of the organization’s staff has been involved in the Earn & Learn program.

Seals said he’s been able to get to where he is now because people were impressed by his hard work. But he knew right away he didn’t want to waste his chance. “When I first came, when they first called me … I thought to myself, ‘This is an opportunity to get a job so I’m gonna give it the best I can, give it my all.’”

The Clean Summer Youth Program received $375,000 of funding for 2015, missing out on $60,000 more from Community Development Block Grant funds, money that Stamper said would have allowed the program to employ 30 more youth. After the funds were allocated to the youth program during a May 27 Community and Economic Development Committee meeting, the money was returned to Compete Milwaukee, a transitional jobs program that has struggled to fill 135 openings because of narrow eligibility requirements. As of the committee meeting, 72 of those placements had been filled.

Stamper, who initially asked for $1 million, said he just wants the money to be put to the best use, and that both programs should be reevaluated. At the same time, Stamper said kids want to work and “the capacity is there” to employ them.

“I don’t think they should be turned away,” he said. “Give them a job if they want it.”

“Every summer we get lots more applications than we have jobs available,” she said. “With more funding, we could fill more jobs.”

“It’s a win, win,” said Rhodes of Stamper’s new initiative. “We wish it was more than six weeks; we wish there was more funding.”