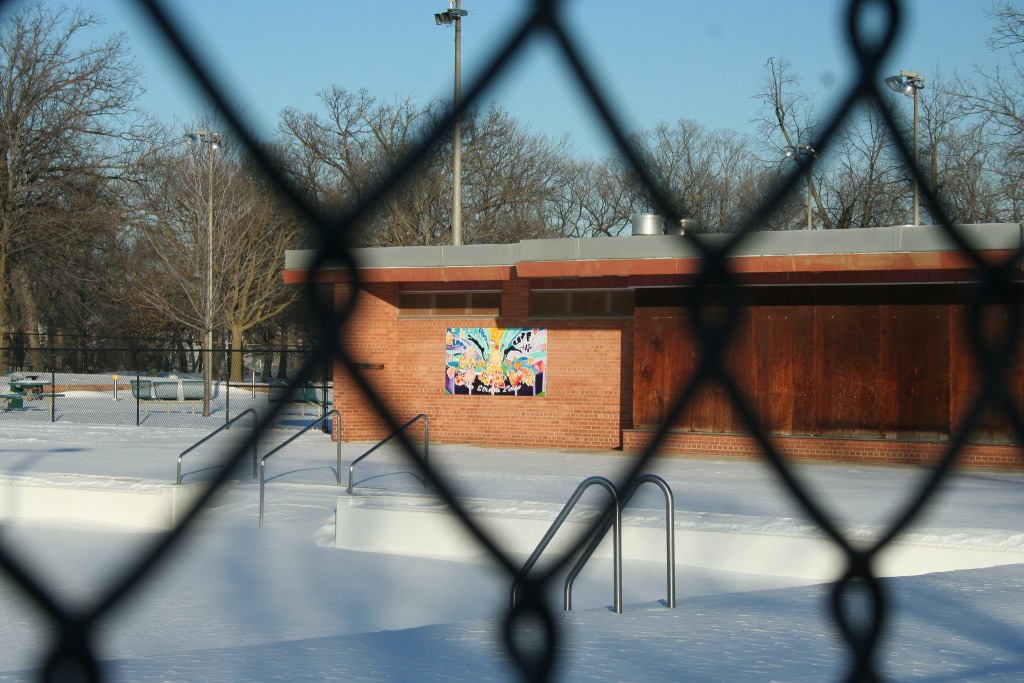 The Washington Park pool building will get much-needed repairs this summer. (Photo by Jabril Faraj)

Milwaukee Habitat for Humanity will receive $225,000 toward physical improvements in the Washington Park area, as part of a nationwide Wells Fargo program.

The money will allow Habitat to rehab six vacant, foreclosed properties, and will provide funding for 10 existing homeowners to make “affordable, critical repairs to their homes,” according to Executive Director Brian Sonderman. Habitat will match a portion of the funds, which will go to make “much-needed” improvements to the Washington Park pool building.

“The funds that we’ll receive through this grant are going to have a dramatic impact on the park itself,” Sonderman said. “It’s one that’s in desperate need of repairs, and that will draw in more families to be able to utilize this wonderful asset.”

Since 2013, Habitat has focused Neighborhood Revitalization efforts on the Washington Park area through new construction, rehabs and community partnerships. Sonderman said the initiative is “striving to eliminate poverty housing and its effects on the families of Washington Park.” 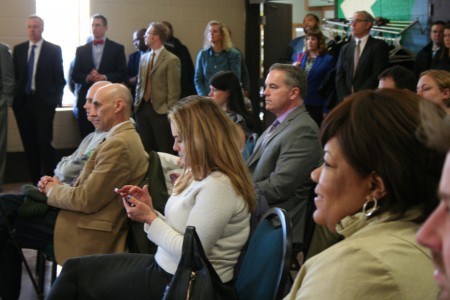 A crowd of corporate partners and local government employees looks on during the announcement. (Photo by Jabril Faraj)

“The end goal is to have a neighborhood where property values are stabilized — they’re on the increase — to be able to continue the positive momentum in terms of safety,” he said.

Habitat for Humanity has also partnered with Washington Park Partners, Safe & Sound and the 3rd District Police to implement the Byrne Grant, a three-year, $600,000 effort to reduce crime in the area.

“Law enforcement … is focusing a lot of effort here, as well,” said Mayor Tom Barrett. “We’re going to continue to do that because we know that this is a very livable neighborhood and we want it to be a safe neighborhood, as well.”

Regional President Sang Kim said Wells Fargo has “a great partnership with the city and Habitat for Humanity” and called the efforts in the area “a perfect opportunity for us to step up.”

He added, “We relied on our partners … to make sure that [the money] gets allocated into the right places. And, you know, Washington Park is an area that we’re very familiar with and committed to help to revitalize.”

Barrett said if there are multiple foreclosures on a block, they will drive down the value of the properties around them. “When Habitat announced its five-year plan [in 2013] … to focus resources here in the Washington Park neighborhood, [that] was, I think, really a turning point for this neighborhood,” he said.

“What’s really amazing about Habitat is that they’re able to really keep the homes affordable for low- to moderate-income families,” said Bess Earl, sustainable communities director at Washington Park Partners and a coordinator with the Byrne Grant.

Habitat has served nearly 90 families through “housing-related projects” over the last three years, according to Sonderman. There are 200 families in Washington Park already in Habitat homes, he said.

Earl said assessments on new Habitat homes are between $60,000 and $90,000. She said investment would raise property values slightly. “In 2009 their homes were assessed at $135,000,” explained Earl, referring to area homeowners, many of whom are older. “Now, their homes are assessed at $35,000. They can’t borrow against their home to repair their home, they’re getting hit with code violations, they’re losing their home insurance because they can’t fix their roof.”

A search of the real estate website Zillow shows 38 homes for sale in Washington Park, the area bounded by North Avenue, Vliet Street, 47th Street and 35th Street. Of the 38, 24 are foreclosed or in pre-foreclosure; 12 of the 15 foreclosed properties for sale are listed between $51,000 and $80,000. Median household income in the area is $26,415, almost 30 percent lower than the median citywide.

Sonderman said rising values driving out low-income residents might be an issue in the long term but it isn’t an issue, right now. “We’re optimistic,” he said. “We don’t see that as being a real significant challenge over the next five to 10 years.”

According to Milwaukee County Parks Director John Dargle, the pool has been in disrepair for some time, but the resources for repairs just weren’t there. He said a Parks Department partnership with the YMCA; a new long-term lease with the Urban Ecology Center; a county commitment to renovate the band shell and baseball fields; and the involvement of many different partners have made this investment possible.

Dargle said there has been a spotlight on the park in the last two years. “We want to continue that momentum.”

He added that the county plans to involve area residents in every aspect of the improvements. “We’ll start getting the word out and getting everybody fired up and cheering for this improvement,” said Dargle.

Sonderman added, “We look forward to the next chapter of this neighborhood.”