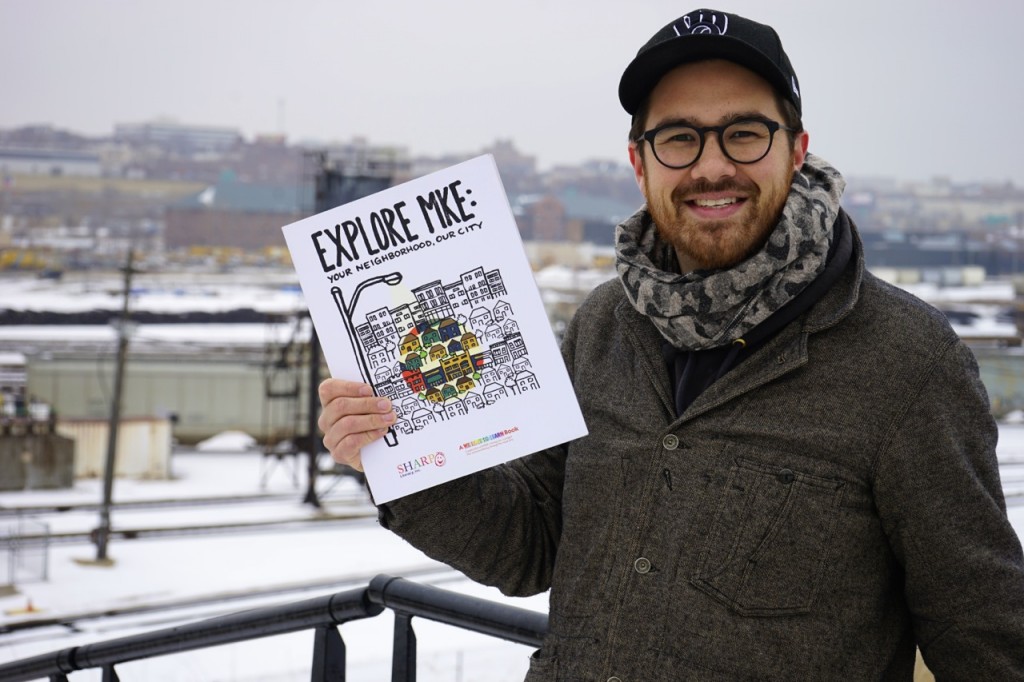 Author Adam Carr displays his new book, “Explore MKE,” with the Menomonee Valley in the background. (Photo by Brendan O’Brien)

Hundreds of third graders across Milwaukee will soon have a new book in their hands — not another dry math or history text — but a vivid guide that inspires them to explore their city and teaches them about the rich diversity across Milwaukee.

The book, “Explore MKE: Your Neighborhood, Our City,” is the latest work published by Sharp Literacy, a local organization that promotes reading, writing and research through interaction and the visual arts.

The 84-page book, featuring colorful drawings and photographs, “connects people to their instincts of being curious and open to the possibility of being surprised by their city,” said author Adam Carr, a life-long Milwaukeean.

“I would like the book to be a starting point for where children will go next with their exploration of Milwaukee,” he added. 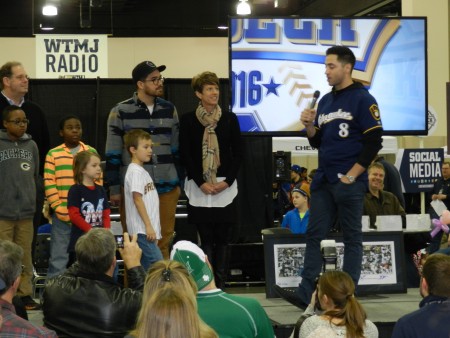 The backbone of the book is ongoing conversations between two fictitious children, Anya and Jayden, who share their thoughts about living in Milwaukee with each other. Anya just moved to the city because her dad, who works at Rockwell Automation, was transferred from Texas. Jayden has lived in the city his entire life.

“So far, I love Milwaukee. It feels alive. And exciting,” Anya said early on in the story, to which Jayden wrinkled his nose and replied, “I’ve lived here my whole life, and that is just not how I see it.”

The children’s diverse experiences with the city they share are a critical theme throughout the book, said Lynda Kohler, president and CEO of Sharp Literacy.

“[It] helps children gain a greater appreciation for cultural differences and encourages an atmosphere of open mindedness and acceptance,” she said.

Some 150 students from five elementary schools across the city participated in Sharp Literacy’s Young Authors’ Workshop and helped Carr do research for the book. Throughout the 2014-15 school year, Carr regularly met with the children and gave students assignments that required them to explore their blocks, neighborhoods and the city, and submit what they found.

At the end of the school year, the children gathered with Carr at the U.S. Bank Center building, where they discussed what they learned. The diverse group of students also went to the top of the building, the tallest in Wisconsin, to view the city and to get a wide perspective of where they live in relation to the city as a whole.

“They could talk about what makes their block and city special. It made them understand that there is more to it than just what’s in their neighborhood,” Kohler said. “There’s no hiding it: we’re a segregated city and if we can tear down some of those barriers at a young age or before they even have them built, we are better off.”

The book is the 13th published by the literacy organization and will be distributed to about 600 third graders who participate in the Sharp Literacy curriculum during the 2016-17 school year and about 200 students who take part in the organization’s summer program.

The Brewers Community Foundation sponsored the book, which is an updated version of “All Around Milwaukee,” published in 2006 by Sharp Literacy, which is celebrating its 20th anniversary this year.

“From the perspective of third-grade students, it provides a fresh view of the City of Milwaukee, comparing buildings, parks and other areas in ways that I would never have thought of,” wrote Cecelia Gore, the executive director of the Brewers Community Foundation, in a letter published at the front of the book.