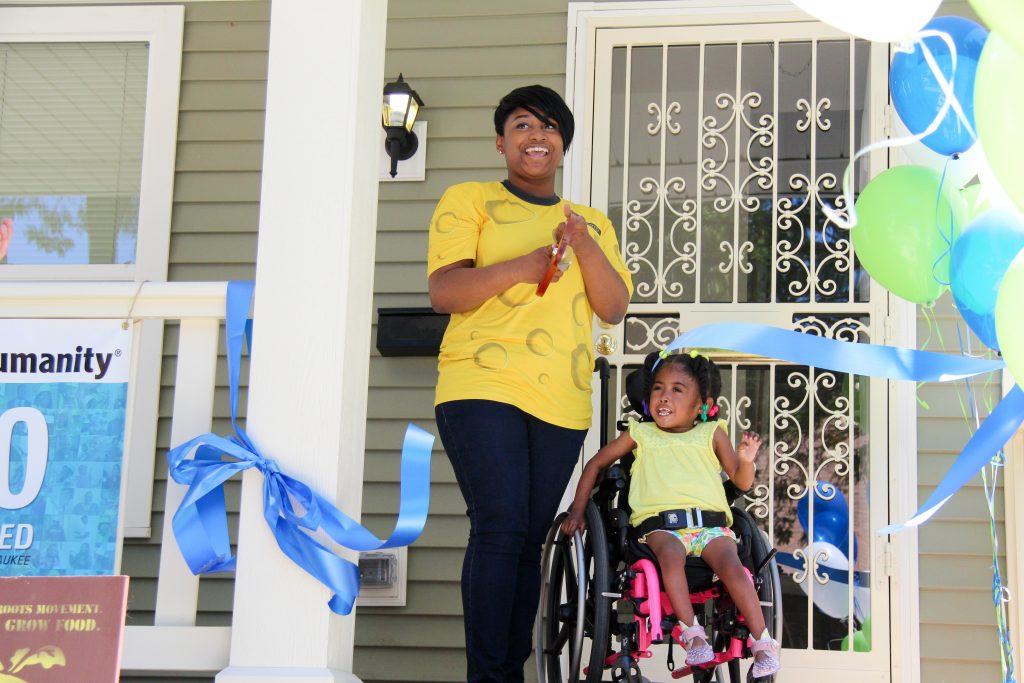 Deanna Brown and daughter in front of their new home (Photo by Jake Brandt, Milwaukee Habitat for Humanity)

Milwaukee Habitat for Humanity welcomed its 1,000th family served in the Greater Milwaukee area into their new home during a ceremony on Friday, June 17th, in the Washington Park neighborhood. For the past 32 years, Milwaukee Habitat has carried out their vision of building a world where everyone has a decent place to live through new construction, home rehab, and repair programs. For the last four years, Milwaukee Habitat has focused all of their work in the Washington Park neighborhood as part of a five-year neighborhood revitalization strategy. In that time more than 200 families have been served, crime rates have decreased, and property values have risen, helping build a strong community in partnership with families in need of affordable housing.

Deeanna’s home, sponsored by Sargento, was built A-D-A compliant to accommodate her five-year-old daughter. As Deeanna helped build her own home alongside volunteers, she recounted on what this will mean for her family, “Having an A-D-A home means a long term home for us. This new construction home will change our lives physically, mentally, and financially.”

Not only will this home offer increased accessibility for Deeanna’s daughter, but Milwaukee Habitat’s affordable mortgage will be 1/3 less than what she was previously paying to rent an apartment that was not conducive to their needs.

This home marks the 26th home Sargento has built in partnership with Habitat for Humanity. Barbara Gannon, Sargento’s Vice President of Corporate Communications and Community Relations, joined a crowd of Sargento employees for Deeanna’s house dedication to mark this milestone of 1,000 families served. As Milwaukee Habitat’s first corporate house sponsor, Sargento Foods has supported Milwaukee Habitat since 1992, with employees volunteering nearly 12,000 hours in that time.

About Milwaukee Habitat for Humanity