You are here: Home / Home / Carousel / Judge to rule on permanent order to keep Sherman Park open after 6 p.m.
Share this... 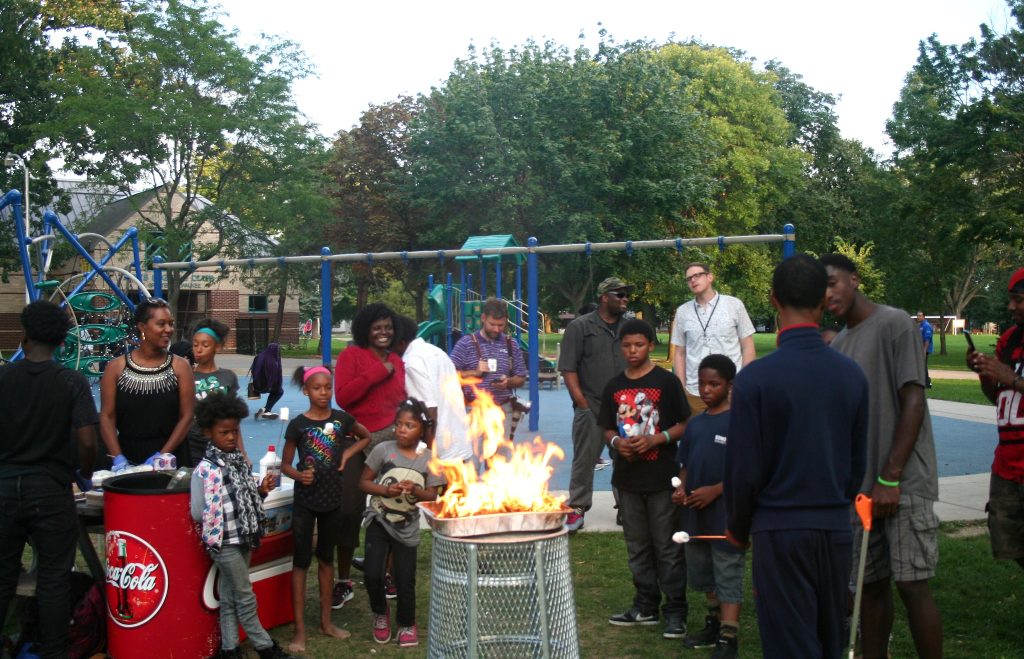 Residents, community members and elected officials gathered near the playground in Sherman Park Sunday night in defiance of a weeks-long curfew. (Photo by Jabril Faraj)

A court hearing on a permanent restraining order is scheduled for Wednesday afternoon, after a Milwaukee County Circuit Court judge granted a temporary restraining order Sunday against Sheriff David Clarke, prohibiting him from continuing to enforce a three-week long curfew at Sherman Park.

The curfew, which has been in effect since Aug. 15, had caused the park to close at 6 p.m. instead of the normal closing time of 10 p.m., and has stymied a grassroots group working with youth in the area. Clarke instituted the curfew after two days of sometimes-violent demonstrations in the neighborhood following the police killing of Sylville K. Smith.

“The park needs to be open,” said Vaun Mayes, an organizer of Program the Parks. “Every other park is still open till 10. Why are they targeting this one? There’s nobody from a riot or any other situation that is here in this park.”

In an email statement, Milwaukee County Executive Chris Abele said, “Liberal access to public spaces like Sherman Park should generally be protected, and in this case especially where the park is of significant value to the community, we were all eager to see a return to normal operations.”

Sheriff’s deputies did not give a reason why the park has remained closed or why Clarke sought to defy an order by Abele to reopen it. The Milwaukee County Sheriff’s Office did not respond to a request for comment. 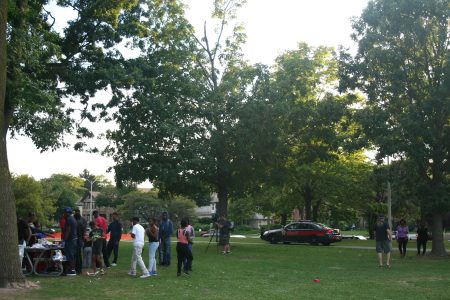 Residents and youth mingle near the Sherman Park tot lot as a sheriff’s vehicle patrols the area. (Photo by Jabril Faraj)

“They’re using it as an excuse to keep the youth, and us, out of this park — that’s really what it boils down to,” said Mayes, calling the move by Clarke a “power trip” and retaliation for the events following Smith’s killing.

He added, “The only thing that’s standing between balance in this community, and this park in particular, is [the deputies’] presence and this curfew.”

From January through July, the Milwaukee County Sheriff’s Office responded to 206 calls for service to the park. More than half of those were listed as a “high visibility patrol inspection.” Forty-three such patrols occurred in July alone.

Sunday night, elected officials and local media joined a group of residents, youth and small children already gathered in the park. Shortly after 6 p.m., sheriff’s deputies asked individuals from the group to leave, but State Sen. Lena Taylor and County Supervisor Sequanna Taylor rebuffed the request, stating that there was no state of emergency or illegal activity taking place. Food was served, children played on the playground and young people roasted s’mores as the group waited for news on the restraining order.

Moore added that established institutions, including law enforcement, need to make an effort to understand and work with resident leadership. “When people step up, they may not step up always in the way a 501(c)3 would. But the impact that they’re having, it can’t be ignored,” he said.

That starts by reaching out and not walking away, Moore said, adding it’s important to build relationships to keep one another accountable.

Moore said, “If anybody is doing anything that compromises getting to that goal … that is a problem.”

“There are hard conversations that have to be had about the lack of trust,” said Lena Taylor.

“It starts by doing something different. We can’t do the same thing and expect different results,” she said. “You can’t just say, ‘We need more policing,’ but you don’t do policing differently.”

A group of teens in Sherman Park said police need to stop looking at kids as “suspect” and blaming them for the actions of adults.

The Zeidler Center for Public Discussion is holding police-resident listening circles in Amani, Harambee and Metcalfe Park, which Taylor said should be expanded across the city and utilized with all law enforcement agencies. She said training in de-escalation and cultural competency is necessary, but that officers also need more opportunities to interact with the community in a positive way.

Sunday night, after informing the crowd that the park would stay open until 10, one of the deputies roasted a marshmallow with children. Taylor called the moment “symbolic.”