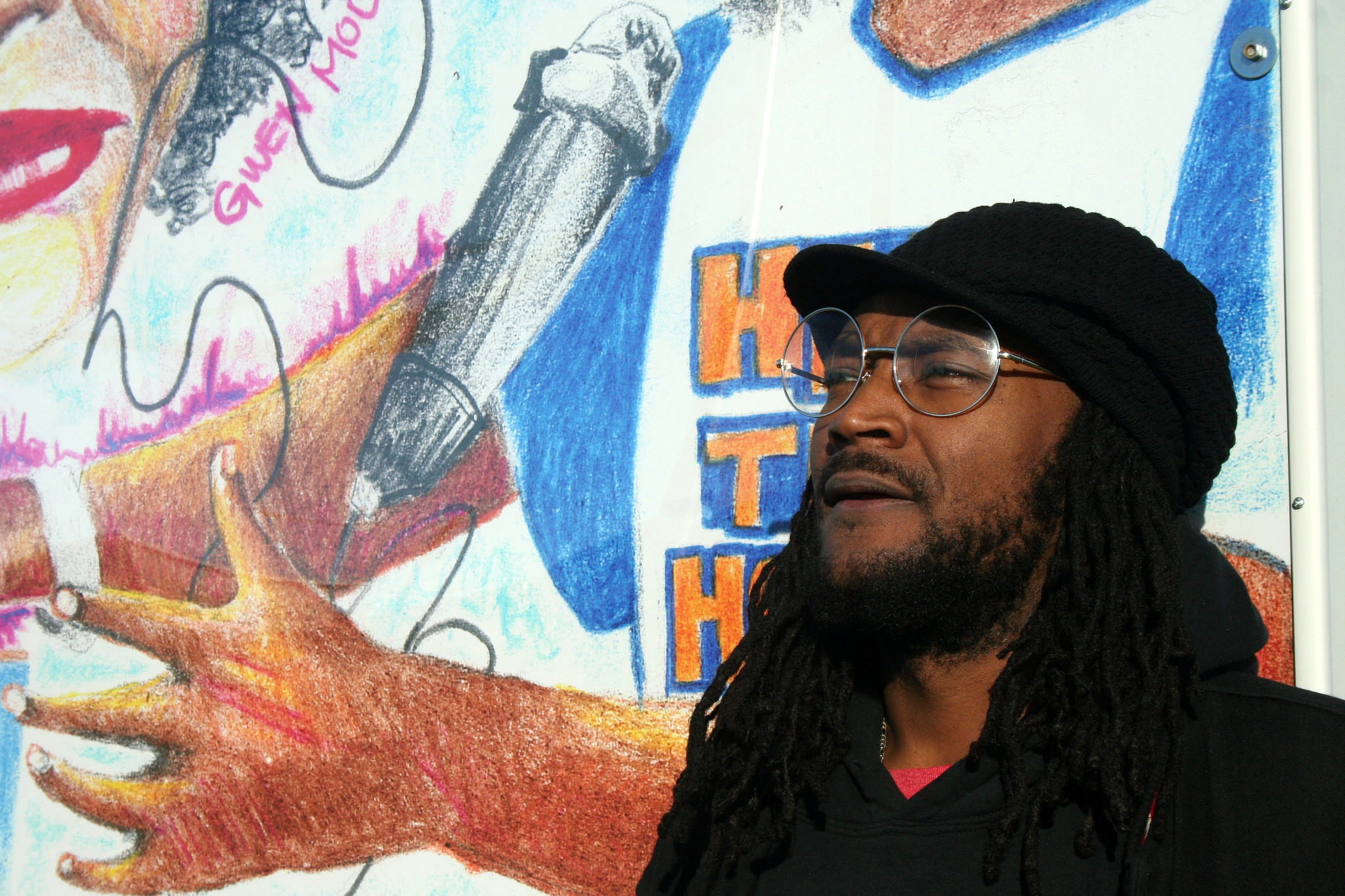 Ajamou Butler stands beside the “Milwaukee Superheroes” mural on the north end of Harambee. (Photo by Jabril Faraj)

When he was a young boy, Ajamou Butler’s family moved around a lot. Then, there was the time his family was evicted from their North Side home, forced to stay at a motel. Eventually, they moved to a house near 35th and Burleigh that Butler called “terrible” — it had busted windows, and it was winter — but it was what they could afford.

“That’s what poverty looked like and felt like for us growing up,” Butler said. But he also said he didn’t realize they were “knee-deep in poverty” until he was an adult.

“I tried to make everything an adventure,” said Clara Fleming, Butler’s mother. “Because children should not ever know lack.” Still, she said, “It’s heartbreaking. A parent’s biggest worry is that they will not be able to provide for their children.”

Regardless of how hard his parents worked to provide a positive environment for Butler and his siblings, there were other forces at work. 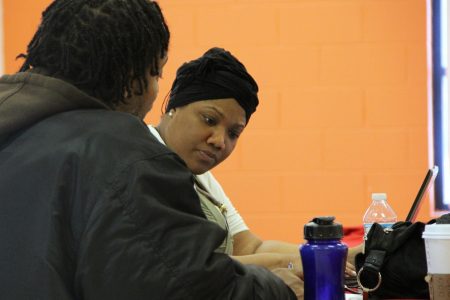 Shanyeill McCloud helps an attendee of an event at Park Lawn YMCA, where McCloud checked the records of dozens of people and counseled them about privatizing their criminal history. (Photo by Scottie Lee Meyers)

“No matter what your parents do to try to raise you, being affected by the ghettos just is what it is,” said Butler as he remembers being jumped by a large group of guys when he was a freshman in high school, seeing prostitutes and dope heads on the block, hustling marijuana “just to make sure that I could take care of myself.”

But poverty wasn’t the only worry. Growing up as a black male in some of Milwaukee’s poorest neighborhoods had its own challenges.

Fleming said, “I asked his father one time, when he was young, ‘What do you think he’ll be when he’s 18?’ And I never forgot his answer. He said to me, ‘I just hope he makes it to 18.’ As a mother, that takes your breath away.”

It was his experience as a black man and the birth of his son when Butler was 21 that helped shape who he would become. Butler, 25, is known by many as founder of Heal the Hood. The organization, which began in 2011 and has hosted block parties in locations across Milwaukee’s central city, has since expanded to include workshops and multiple yearly events.

While working three jobs — at his father’s retail store, a night cleaning gig and as building manager at his apartment, on top of speaking engagements and other Heal the Hood events — Butler went back to hustling a bit on the side.

At the time, Butler was supporting his young son and a girlfriend who was unemployed, and money was tight. Early last year, he was pulled over by Milwaukee police, who caught him with less than a half ounce of weed, according to Butler.

“I definitely kept us afloat. We wasn’t rich … but we were afloat,” said Butler in a recent interview. “I’m not a money-driven person but … I’ll do anything to feed me and my son.”

Butler’s run-in with the law came with consequences. After spending a few days in jail, he was able to post bail but later found out that the misdemeanor offense would keep him from speaking in Milwaukee Public Schools; motivational speaking and mentorship are part of his work with Heal the Hood.

He acknowledged that some people might find the nature of his work and the reality of his infraction hypocritical, but, according to Butler, “they go hand-in-hand.”

“When I go speak to the youth, I tell them, ‘Hey, listen, I’m not too far from you … don’t think that I’m up here teaching and preaching and I’m not in the same shoes that y’all [are] in.’”

About one in eight black men in Wisconsin was incarcerated in 2010, more than any other state in the country and nearly double the national average, according to a 2013 paper by John Pawasarat and Lois M. Quinn, the most recent study available. Nearly 70 percent of the state’s black population resides in Milwaukee County, where more than half of African-American men in their 30s have spent time in state prisons. Between 1990 and 2011, 82 percent of the men incarcerated in Milwaukee County for drug offenses were black, according to the paper.

During the same period, two-thirds of the county’s incarcerated African-American men came from six ZIP codes that encompass many of the poorest neighborhoods in Milwaukee, the study found. Of the black men incarcerated, 32 percent had non-violent or drug-only convictions.

Early this month, Butler successfully had the marijuana incident expunged from his record, a process that erases the record of the infraction, and the stigma that can follow. For an expungement, individuals must have been younger than 25 at the time of the offense, be off parole or probation and write a letter to the judge explaining why they believe they are eligible.

Shanyeill McCloud, founder of Clean Slate Milwaukee, who helped Butler through the process, said employment and housing discrimination stemming from a past conviction are rampant in Milwaukee, a reality she hopes to combat through her work. She called Wisconsin’s expungement laws “backwards,” noting that how long ago the infraction occurred is not taken into account, and a 2009 law that allowed for felony expungements was not made retroactive. McCloud also pointed out that municipal tickets are not eligible for expungement in Milwaukee.

The combination of these factors “equals the institutional racism you hear about,” said Dennis Walton, outreach coordinator at the Milwaukee Fatherhood Initiative. Walton lives and works in the 53206 ZIP code, Milwaukee’s poorest.

“When you are up against these hidden barriers that exist, what it does is it disenfranchises people from being a part of the American Dream,” said Walton, who is black. He added, “This is no longer a civil rights issue — this is a human rights issue.”

Butler said the arrest has given him added perspective, especially when talking to youth who have been in jail. “I was only in there for less than 72 hours, but that’s all I needed,” he said. “Since then, I haven’t had any legal issues. Obviously, I’ve stopped hustlin’ and, you know, just really dedicated myself full time to this campaign.”

Last year, Butler’s face was painted on a “Milwaukee Superheroes” mural on the North Side, next to those of other Milwaukee leaders. He said it’s a reminder of what he’s accomplished, despite his failings.