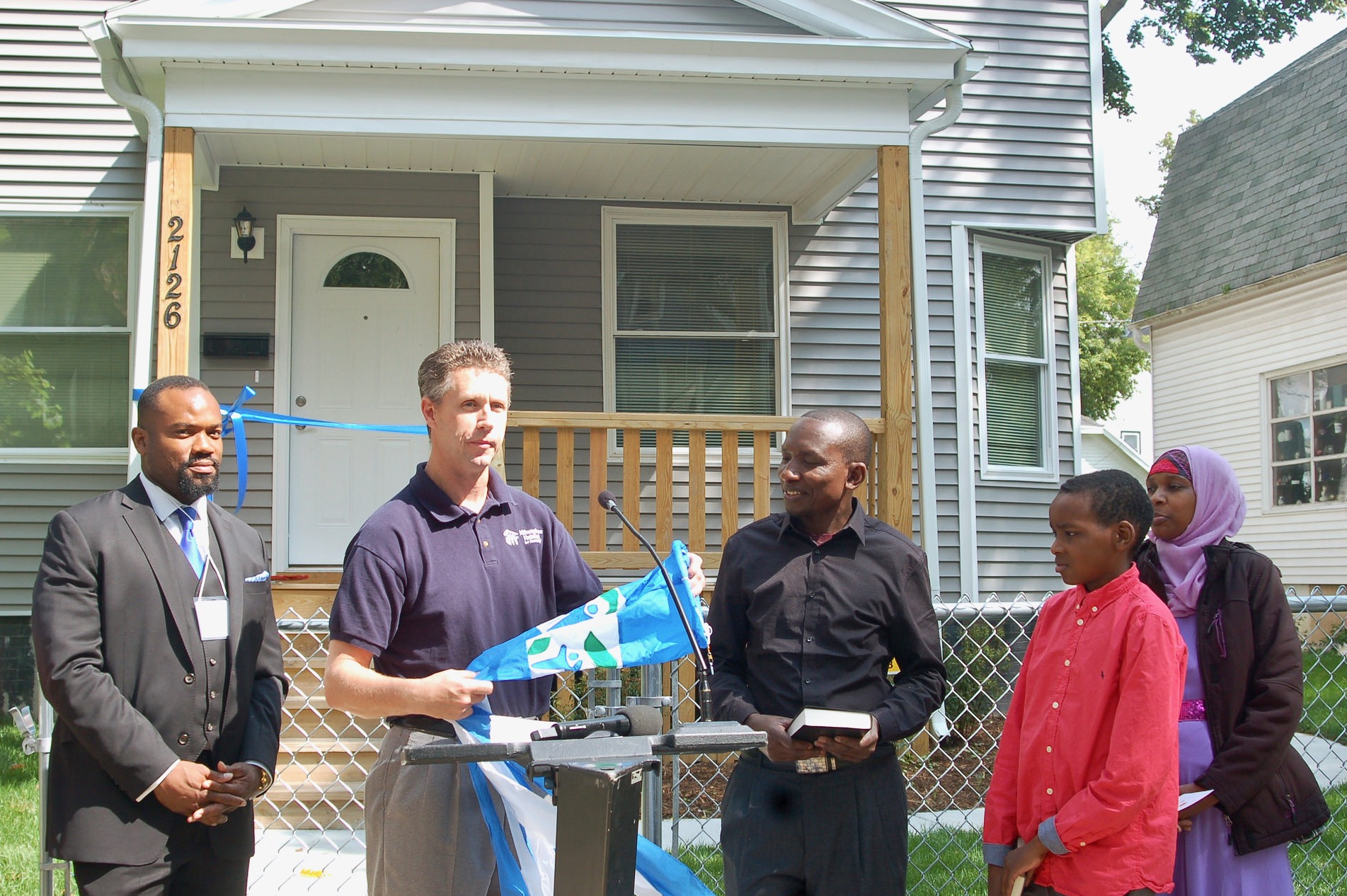 Milwaukee Habitat for Humanity Executive Director Brian Sonderman (at microphone), presents Osman Hassan and his family with a windsock at the ceremony for the completed home as Ald. Russell Stamper looks on.

Twenty-two years of upheaval for one family and several years of tension for a Washington Park block ended with the arrival of the Hassan family on the 2100 block of North 37th Street.

Officials celebrated the completion of the first rehabilitated home under the city’s RICH program (Re-Invest in City Homes), which, in partnership with Milwaukee Habitat for Humanity, flips city-owned foreclosed homes. Its first completed project simultaneously flushed out a drug trade operation and put a refugee family in a home big enough for the parents and eight children.

Civil war forced Isha Adan and Osman Hassan to flee from Somalia 22 years ago. For 10 years, a refugee camp in Kenya was home, until they came to the United States in 2004 and Milwaukee in 2008.

Their journey was chronicled by the family’s 18-year-old daughter, Zeynab Ali, in a book she recently self-published, titled “Cataclysm: Secrets of the Horn of Africa.”

The family of 10 currently lives in a three-bedroom house. They will soon move into a 1,900-square-foot, five-bedroom home with a yard and garage. 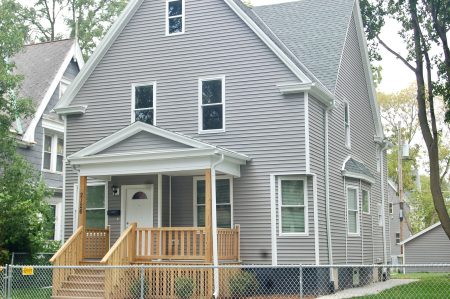 Hassan, who was joined by Adan and their 11-year-old son at the house dedication ceremony, said through a translator that their current home is much too small and this new one “will bring a lot of joy.”

The three smiled warmly throughout the ceremony. Hassan introduced himself to nearly everyone in the crowd of 50 attendees. Before their son, Abubakar Ali, cut the ribbon and entered the home, Adan turned to the crowd and thanked everyone.

The RICH program, sponsored by Ald. Russell Stamper II, was approved by the Milwaukee Common Council in 2014 with $600,000 in annual funding. The city sells, for $1, certain foreclosed homes in distressed neighborhoods to Milwaukee Habitat for Humanity, which then rehabilitates and sells them. The buyers are provided with a mortgage that they pay back to the city with 1 percent interest over 10 years.

Buyers must not have owned property in Milwaukee within the last two years, have uninterrupted employment for at least one year, have a favorable rent and debt history, and agree to live on the property for five years. They also must contribute 300 to 500 hours of “sweat equity” — meaning they must help rehabilitate the home and complete Habitat for Humanity’s financial literacy and homeowners program.

The RICH program is designed to flip 15 houses per year. Seven others are currently under construction, according to Brian Sonderman, executive director of Habitat for Humanity.

Like its new inhabitants, the home at 37th Street has gone through quite a journey. Years ago, Sonderman said, the home operated as a functioning drug lab with “a substantive security system — some pretty dangerous dogs and a lot of guns.” The house was on Habitat’s radar for years, he said, and the organization helped police shut it down.

“Think about the homeowners on either side of this house” who will no longer have a criminal enterprise next door, Sonderman said. “This house in particular has a tremendous amount of meaning for [us].”

“This block has truly received a beacon of hope in this family next to me and a complete transformation of what this home once represented,” said Eric Gremonprez, Habitat for Humanity’s critical home repair manager. “This family, I’m confident, can take on leadership in this neighborhood.”