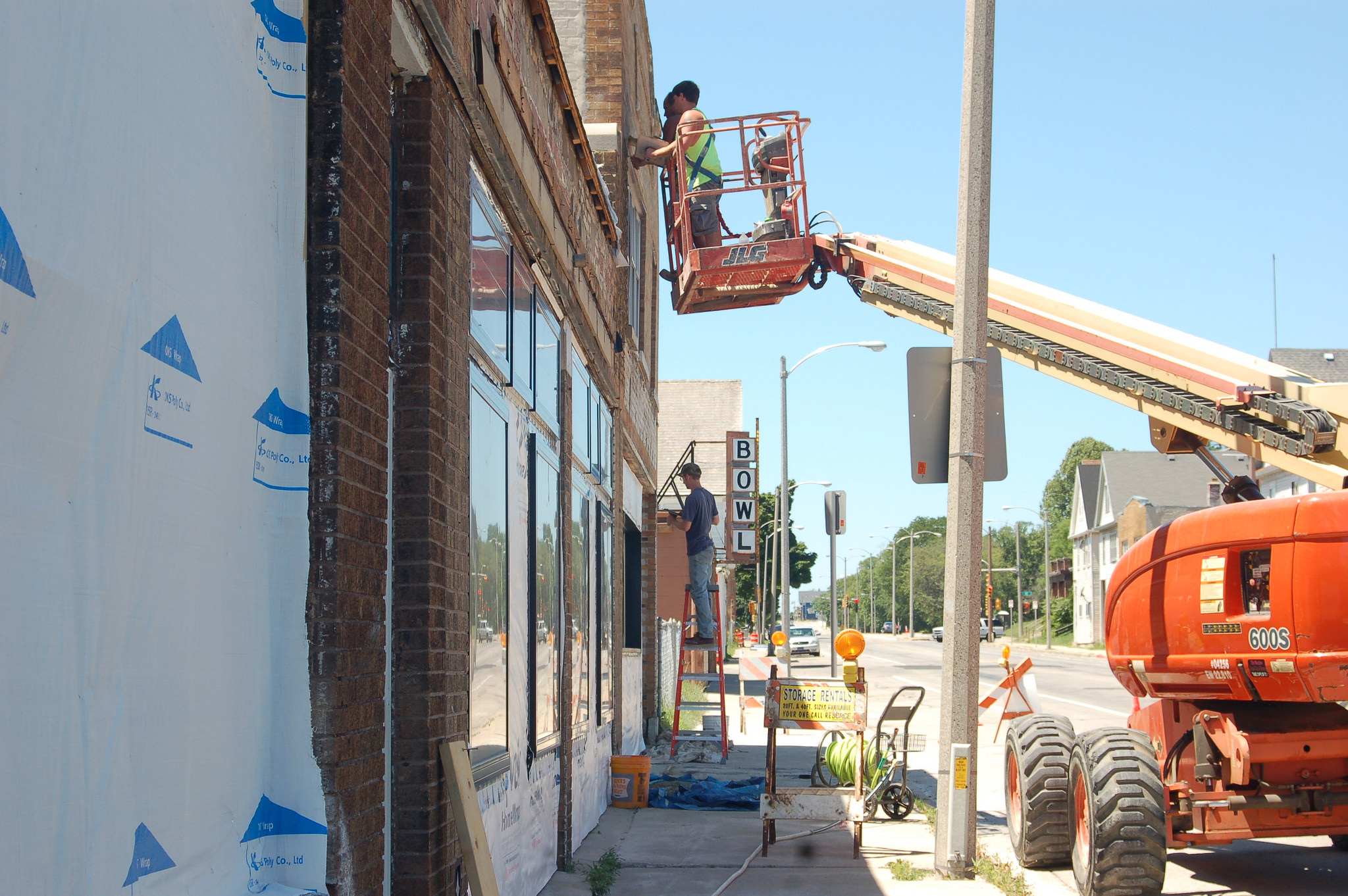 Construction workers renovate the exterior of Pete’s Pops, which is set to open Aug. 11th. (Photo by Jenny Whidden)

Eighty-five years ago, there were seven grocery stores, three bakeries and two meat shops on the Martin Drive neighborhood’s portion of Vliet Street. Today, there are none.

However, resident Pat Mueller sees an upward trend on Vliet, and she hopes the street will return to its former role as a bustling business corridor.

“To me, commercial districts are the gateways to a neighborhood,” Mueller said. “Improving those gateways are important to improving the health of the whole neighborhood and the perception people have of it.”

Mueller got involved in the revitalization of Vliet 15 years ago, when she bought a building with a commercial first floor. From there, Mueller said it became an obsession for her. She is now the treasurer and community liaison on the West Vliet Street Board, and she owns various properties up and down the street.

Two years ago, Mueller discovered $20,000 of funding that the Local Initiatives Support Corp. (LISC) was offering for Vliet Street businesses. She met with representatives of businesses and organizations on Vliet to figure out how to best use the funds.

Though Mueller said it was not a lot of money, the funding kickstarted conversations about how the businesses could make improvements that helped the perception of the street. 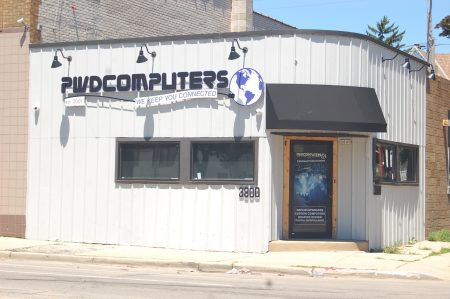 PWD Computers moved to Vliet Street in January 2016. Owner Antwon Perkins made several renovations to the exterior of the building. (Photo by Jenny Whidden)

Improvements since then include Colorwheel Painting’s awning, and facade work at PWD Computers and the Hmong American Friendship Association.

“In a little over a year’s time, things changed quite significantly,” Mueller said. “We have a challenge with perception, and that perception is really starting to change. Things like a sign that says Colorwheel Painting or PWD Computers — that’s a huge change in perception because you can ride down the street and see that there are businesses here.”

Mueller added that another challenge businesses face is the “missing teeth” on Vliet that are residential or municipal and are not going to bring people to the street.

“The average resident or the average customer doesn’t realize how hard it is for a small business to survive,” Mueller said.

Opening up a business can be a very scary process, Mueller said, but the City of Milwaukee has begun to provide more aid for storeowners.

“The first indication of that is there are a number of brown bag lunches where they talk about the permitting process, or the different code processes,” Mueller said. “They’re trying to work more with people.”

Presented by the mayor’s office, the Department of Neighborhood Services, the Department of City Development and LISC, the “Lunch & Learn” summer series offers one session a month through October. The series covers topics such as zoning, occupancy permits and the city building code.

Business owner Antwon Perkins moved PWD Computers to Vliet Street in early 2016, when he did a complete revamp on the exterior of the building.

“From my research, it seemed to be somewhat of a diverse area, and I was looking to expand my business and client base,” Perkins said.

Perkins said he feels safe in the area, and developments at Harley Davidson and the Bucks Arena makes him feel that it is an up-and-coming area.

Looking forward, Perkins said he would most like to see a public market and small restaurants on Vliet, as those businesses would attract traffic and an even more diverse group of people for his business.

While Mueller said she is excited by the progress on Vliet, her largest hope is a grocery store.

“If you live in this neighborhood, and you don’t own a car, and you have lower income, one of the greatest challenges is that there is absolutely nowhere to get food,” she said.

In April 2016, the Near West Side Partners and Community Design Solutions hosted a design charette that produced a vision for a grocery store and public market on Vliet.

The charette, hosted at the University of Milwaukee Wisconsin’s School of Architecture, was a two-day event in which architects, business owners, residents and others gathered to discuss and design potential improvements to commercial corridors on the Near West Side.

“The next steps would be … shopping around for developers and interested parties to see if they have any resources or capital to help with not only the grocery store but also the residential component,” said Keith Stanley, executive director of NWSP. “Something that we found out in our design charette is that we need development to occur that hits more than one box.”

Stanley said NWSP supports a resident-lead Vliet Street organization that surveys the street each month. NWSP also works closely with city departments to ensure that the public spaces on Vliet are well maintained.

The Near West Side Business Improvement District has given grants to several business on Vliet, including Pete’s Pops, PWD Computers and Colorwheel Painting, Stanley added.

With WaterStone Bank, NWSP has been able to put two new businesses on Vliet, including Pete’s Pops, which won the NWSP Rev-Up MKE small business competition, Stanley said. The popsicle stand business is opening a storefront at 3801 W. Vliet St. with a grand opening date set for Aug. 11.

Pete’s Pops owner Pete Cooney said he chose Vliet Street because it is close to Washington Park and close to the highway. Cooney added that he liked that the street is an east-west corridor and that it is close to residential areas.

“I’m always driving through the Near West Side, and I like the idea of … trying to connect all the different neighborhoods in Milwaukee. If we can help that a little bit, that would be great,” Cooney said.

With positive change behind and ahead of Vliet Street, Mueller said she has more hope for the district than she has had for a long time.

“In my mind you don’t start with the coffee shops. It takes a while,” Mueller said. “You’ve got to build up confidence in the street and confidence in wanting to shop and go there. That confidence starts with ‘How does it look? Is it clean? Are the buildings remodeled?’ And we’re on our way.”