You are here: Home / News / Arts and Recreation / Teens share their stories through new Mitchell Street Library mural
Share this... 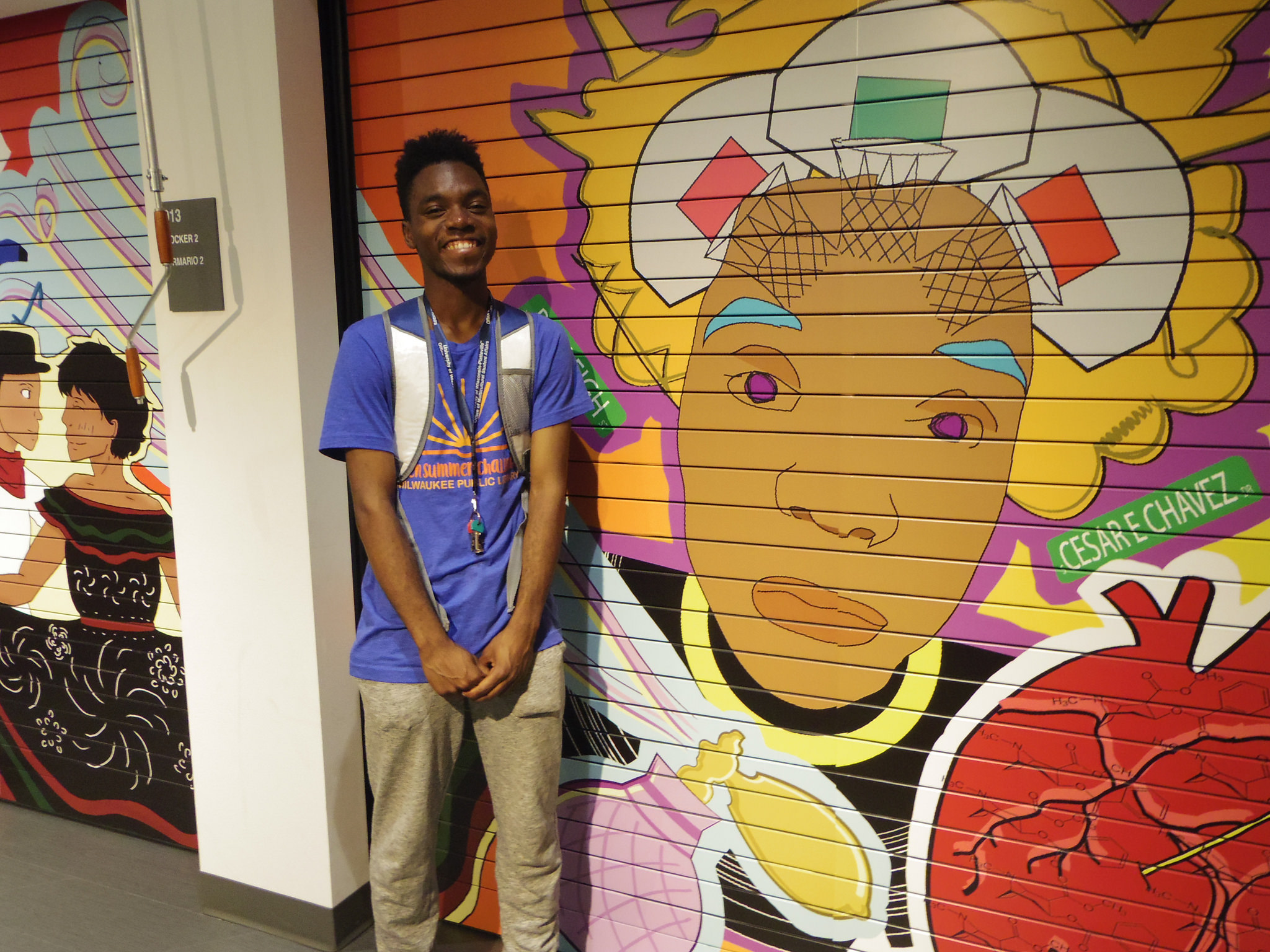 Milwaukee Public Library teen intern Alvin Watts stands in front of his design, which was inspired by his cultural roots in Milwaukee. (Photo by Robyn Di Giacinto)

Applause thundered up the staircase of the Mitchell Street Library as community members celebrated the official unveiling of a new public mural designed by a team of eight Milwaukee Public Library teenage interns in the branch’s “makerspace” technology lab.

“It feels like something you think up in a daydream,” said Maliqk Martinez, a rising sophomore at Tamarack Waldorf School.

Martinez hopes to pursue a career in graphic design but he didn’t have much experience when his father suggested he apply for the internship late last year. He assumed he’d get some experience with Adobe software, but never imagined his art would be displayed in public.

Petra Duecker, teen education and outreach specialist for Milwaukee Public Libraries, explained that the mural was originally conceived as a way to add art to function when she learned that the makerspace would include bay-style garage doors to secure computers when no one was staffing the space.

“We wanted the library to be a place where people feel at home,” Duecker said, “so we wanted to bring color and life to the space.”

Meanwhile, the library was preparing to hire eight teen interns to start in January with funds from the Milwaukee Promise Zone initiative, a targeted economic development program that the Common Council launched in early 2017.

With the help of local nonprofit Artists Working in Education and a grant from the National Endowment for the Arts, the Mitchell Street branch put out a call for an artist-in-residence, ultimately selecting three finalists. The interns themselves interviewed the finalists. They chose Erick Ledesma, a 31-year-old Puerto Rican visual artist with childhood roots in Milwaukee’s South Side.

Beginning in March, the interns worked with Ledesma on Wednesday afternoons to design the murals. They started by answering the prompt, “What is the meaning of personal home, culture and history?” Ledesma then met with interns one-on-one to brainstorm sketches to scan into Adobe Illustrator, and then arrange the individual designs into the final composition.

The result was a colorful mural that’s as diverse and unique as the eight collaborators.

Martinez, for example, drew a pair of blue fish swimming in a circle. His eyes lit up as he described a passion for marine biology sparked by his early childhood in California. “I don’t know, I feel like water represents me,” he explained. 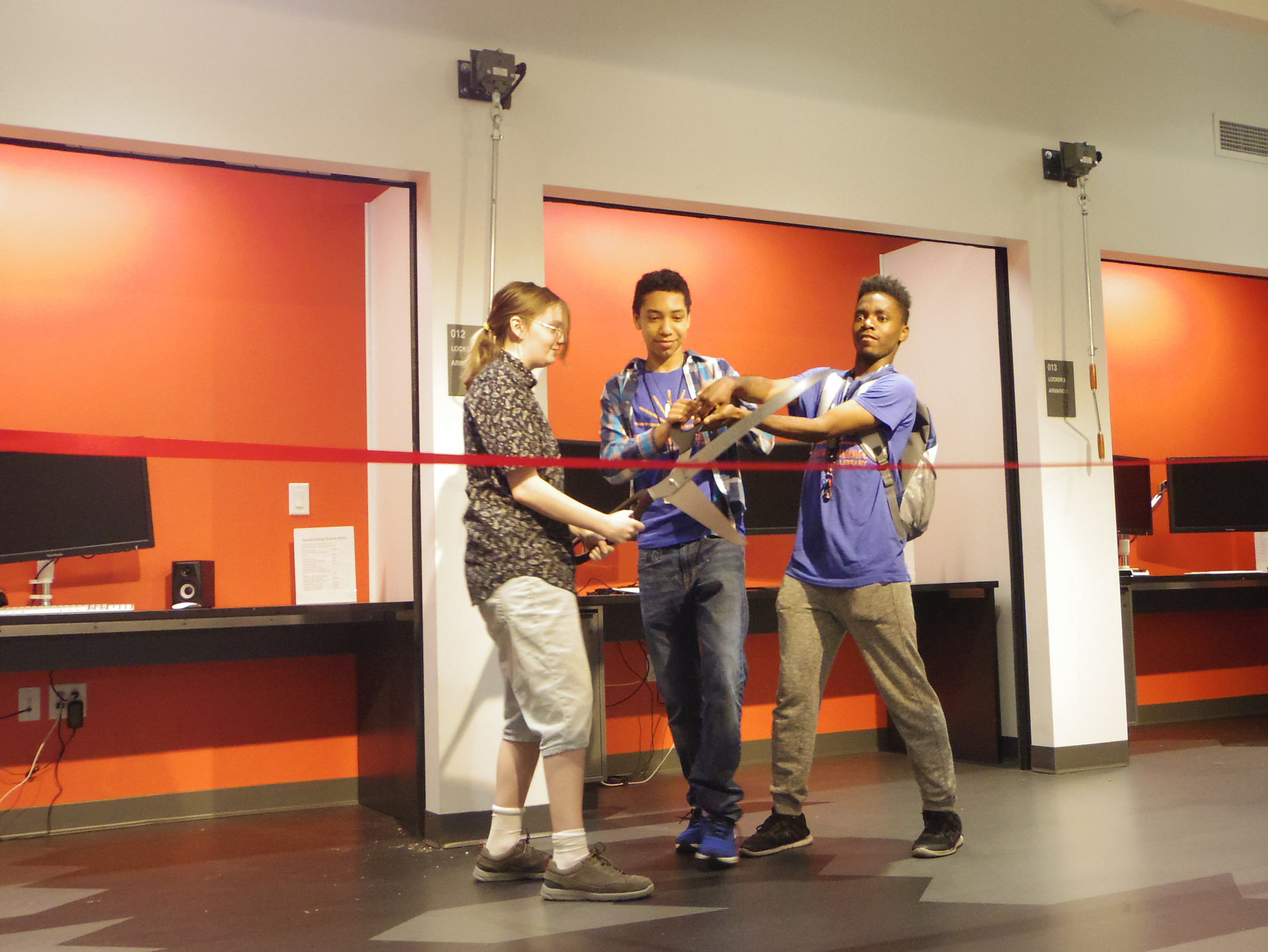 Other interns created designs based on their hobbies. Alex Beyreis-Heim, a rising senior at Golda Meir School sporting a navy button-up shirt patterned with planets and rocket ships, insisted that she wasn’t a “visual artsy person” before starting this project. Rather, it was her love of numbers that inspired her response to Ledesma’s prompt: a poem of 11 lines of 11 syllables that, under Ledesma’s guidance, became a multicolored geometric grid.

“I think a lot of it was creating a lot of disparate things and turning them into a homogenous object,” Beyreis-Heim said quietly, folding her arms and smiling. “I hope that (when people look at the mural), they know there were people that made that … and that this was our lasting mark on the space.”

Other designs had more local roots. Alvin Watts, a recent graduate of the Northwest Campus of Carmen Schools of Science and Technology who’s set to start an engineering program in the fall, said his design was inspired by Milwaukee’s culture.

He picked at the straps of his gray UW-Platteville backpack as he pointed out various aspects of his artwork: a circle of music notes and street signs surrounding the bust of a woman whose hairline mirrors the Milwaukee skyline.

“People have seen Milwaukee as all the bad [things], but there’s other parts of Milwaukee you need to pay attention to,” Watts said. He added that being involved in the mural project has informed his desire to return to his hometown after he graduates from college, so he can help others to see its true beauty.

“All these teens … are in the phase of their life where they’re swimming through so much, (trying to) figure out who they are,” Ledesma said. “I think it’s really important to share our stories. They’re valid and worth listening to … (no) matter what stage of life.”