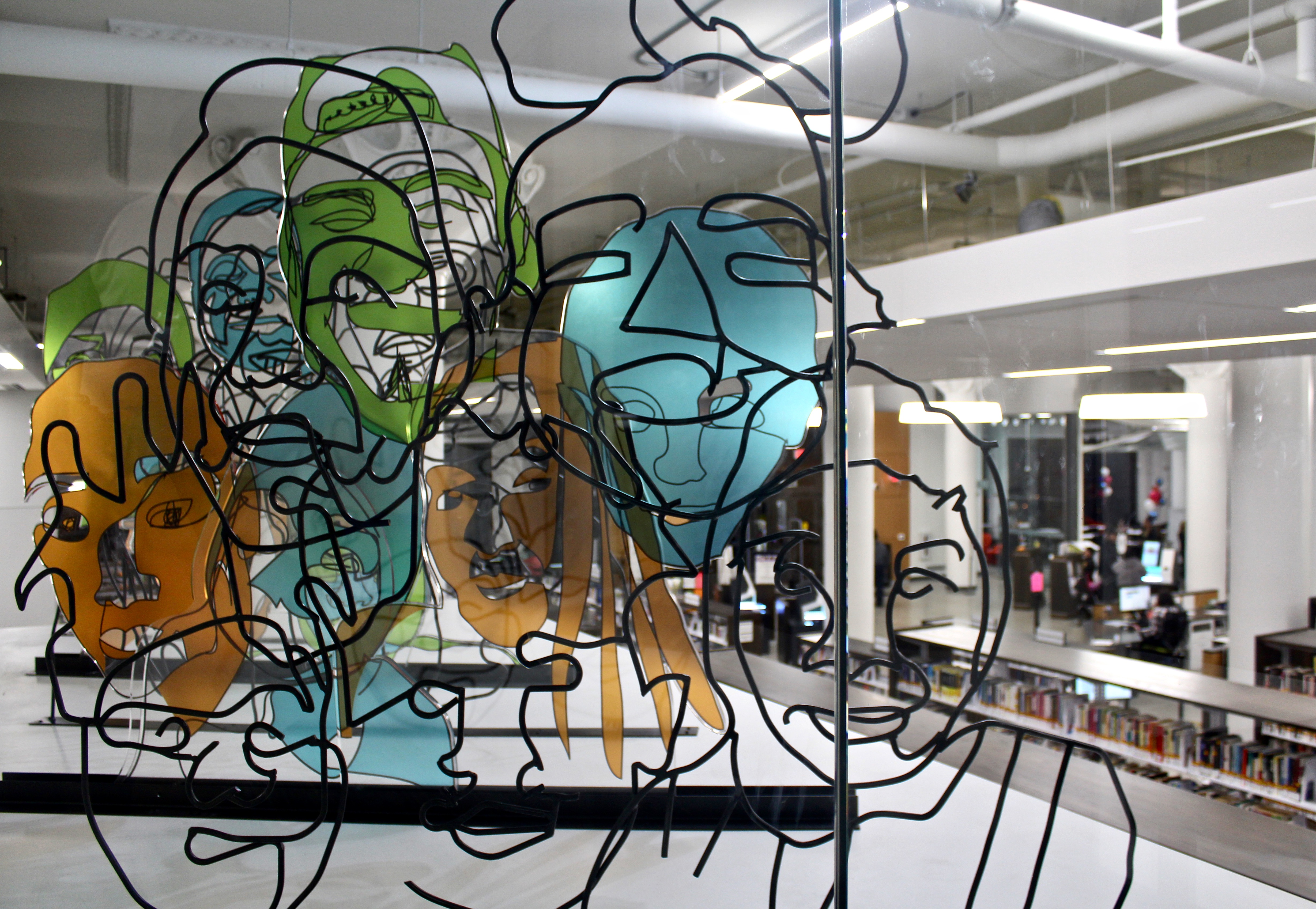 Next time you walk through the front doors of Milwaukee Public Library’s Mitchell Street branch, prepare to be welcomed by the faces of neighbors. A shelf in the northeast corner of the library now houses a vibrant sculpture showcasing self-portraits that have come to life. Erick Ledesma, the inaugural artist-in-residence at the branch, worked in collaboration with local youth and other community members to create the piece, titled “Common Thread.”

“I wanted to make this sculpture an homage to the people, especially the teens and kids, that I got to interact with here, giving them ownership of their space, and letting them know that they should be proud of the spaces that they interact with, because they turn us into who we are,” Ledesma said.

For the past year, Ledesma has been working to turn the library into a creative community space by engaging residents, especially youth, in making multimedia art that explores themes of culture, history, family and identity. Anyone who visited the library was welcome to participate.

The sculpture was unveiled Wednesday evening at a packed event celebrating the culmination of Ledesma’s residency.

“I’ve been thinking a lot about the idea of community lately, and I think it means… coming together in unity to create something,” Ledesma said. “That’s what we did here.”

Library patron Jessica Romany contributed a one-line portrait to the sculpture and participated in Ledesma’s programming throughout the year.

“It meant everything to me because I’m not usually a social person,” Romany said. “To meet people like this and see their passion for art makes me want to be in a place like this. It makes me feel like home.” 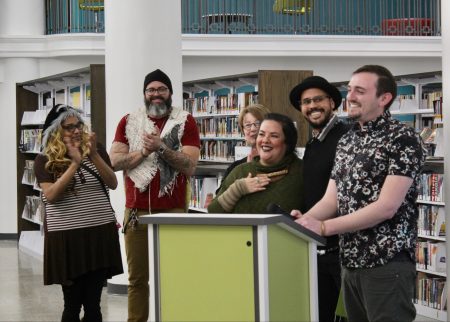 In addition to the sculpture project, Ledesma gathered people to create art and build community through several other projects. Last spring, he worked with teen interns to create murals for the library’s makerspace. During the summer, he led a community canvas project, in which groups of people created paintings together, and a food and arts exchange called the Iron Board Café.

The idea for the Iron Board came from a trip Ledesma took back home to Puerto Rico before he started his residency. As a way to support those affected by Hurricane Maria, he made community meals in local plazas and invited people to eat for free. In a few months, he said he fed over 1,500 people.

Witnessing how food can bring people together made Ledesma want to incorporate cooking into his creative work. Every other week in the library’s makerspace, he introduced an art project and prepared a traditional Puerto Rican dish, such as fried plantains, Puerto Rican corned beef or empanadas. Kids would make a piece of art and exchange it for a plate of food.

Ledesma said he hopes exposure to new experiences, such as trying unfamiliar food, will have a lasting impact on the young people he worked with, whether or not they end up pursuing art.

After unveiling the sculpture, LaShawndra Vernon, executive director of Artists Working in Education, Inc. (AWE) announced that the next artist in residence at the Mitchell Street Branch will be Celeste Contreras, who founded Milwaukee’s Dia de los Muertos Parade.

Contreras has a track record of making community art, especially incorporating themes of death, rebirth and family. She said she has an abundance of ideas for her residency, but wants to co-develop the direction her projects will take alongside community members.

“I want to publish a book for the library by the people,” she said. Contreras called books “sculptures that you get to touch.” She envisions building a beautiful bookshelf to house the homemade books.

Contreras said that she sees the library as an ideal place to pursue her passion of making art in community because it’s so accessible.

“It’s in the coolest space,” she said. “It’s not like a gallery or part of an institution like a university. It’s just a library, where everyone can come.”

That’s the idea behind the initiative that fuels the residency, called Gathering Art, Stories, and Place.

A collaboration of Milwaukee Public Library, AWE, Listening to Mitchell artists Sonja Thomsen and Adam Carr, and Ex Fabula, which is funded in part by the National Endowment of the Arts, aims to “change the narrative of what libraries can be,” according to Vernon.

Wednesday’s event also included a performance by Sista Strings, a booth to create short stories with Ex Fabula and a temporary installment of the Listening to Mitchell project, which is in the process of being archived at the library.

According to Katie Loughmiller, arts project coordinator for Milwaukee Public Library, programming for Gathering Arts, Stories and Place will continue throughout 2019.

“I will keep coming to the library, because I want my kids to grow up in a community like this, where we’re all together, making things, where we all love each other,” Romany said.