You are here: Home / News / Arts and Recreation / ‘We’re on our way up’: The rebirth of Villard Avenue continues
Share this... 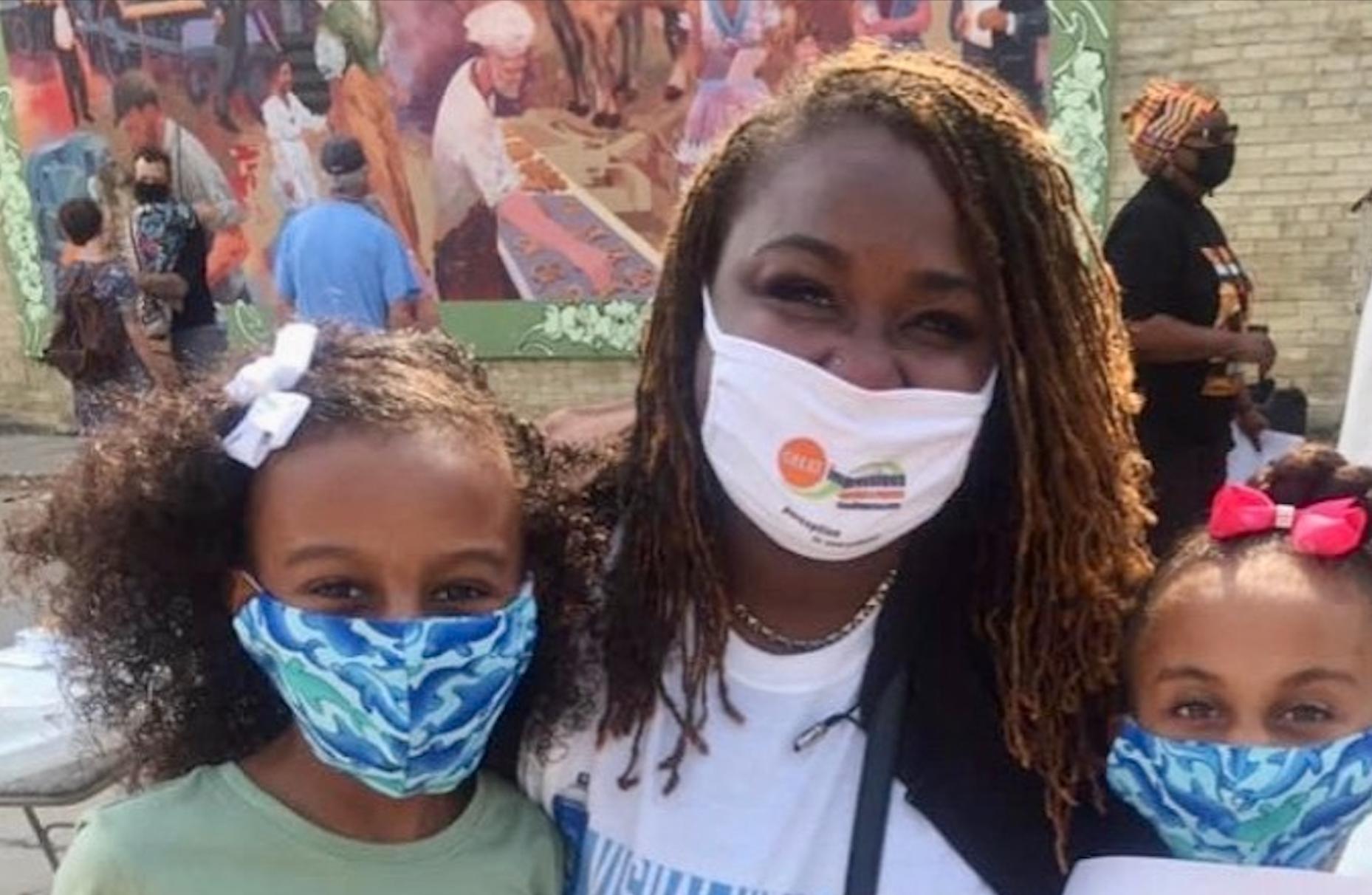 As the pandemic hit and life as most knew it screeched to a halt, Villard Avenue Business Improvement District leaders were faced with a tough decision: Should they hit pause on their efforts to redevelop the once bustling commercial corridor or forge ahead despite their uncertainty?

“I didn’t want our neighborhood to be put on hold anymore,” said Angelique Sharpe, manager of the Villard Business Improvement District, or BID. Sharpe and others are trying to rejuvenate the Old North Milwaukee area, which decades ago fell on hard times when nearby factories closed and its commercial sector crumbled.

Sharpe and others are seeing their decision to carry on pay off as seeds of progress continue to sprout in the historic neighborhood.  One is “Visual Vibes on Villard,” a public art project led by five muralists who were selected by neighbors. They recently completed six murals in the corridor surrounding North 35th Street and West Villard Avenue. The project, funded in part by an anonymous $25,000 donation, was launched in August and features themes of entrepreneurship, cultural pride, community pride, health and wellness and environmental conversation.

“We were able to get some of the top artists in the city to come together and support community pride in the form of art,” Sharpe said. 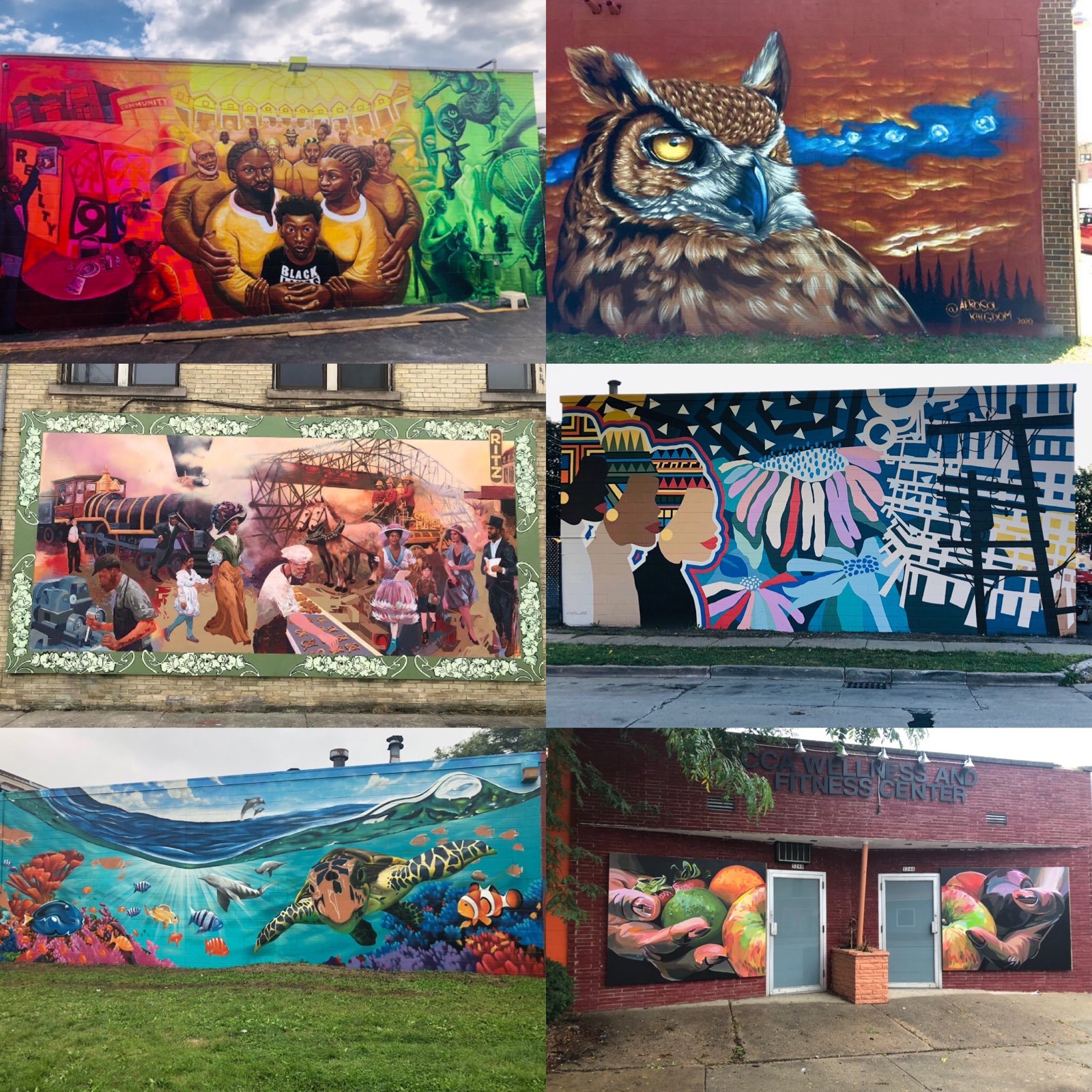 This collection of six murals, dubbed “Visual Vibes on Villard,” was completed this summer despite the pandemic. (Photo provided by Angelique Sharpe)

Jeanette Wright-Claus, a Villard BID board member who purchased a home in the neighborhood in 1986, said beautifying the community with art was major, and proof that progress was being made in the community. Wright-Claus, who previously ran art workshops with teens at the Agape Center, said residents are taking notice of the improvements.

“People, especially young people, can see that things are getting better here and want to be involved,” she said.

Another major project that was announced recently is the return of Marineland Pets, a former neighborhood staple that left its longtime location at North 35th Street and West Villard Avenue several years ago.  The store is moving back to West Villard Avenue from Bayshore and will be located in a 1,600–square–foot commercial space at the Villard Commons, a four-story, 43-unit apartment and commercial building being constructed on the corner of North 36th Street and West Villard Avenue. The Commons, along with another mixed-use commercial building, the Villard Square Library and apartments, 5190 N. 35th St., served as catalysts for investment to the area several years ago.

Que El-Amin, a developer of the Villard Commons and childhood resident of the neighborhood, said the coronavirus slowed but didn’t stop, momentum on the project. The building and store are projected to open in December.

El-Amin said he believes the energy being created on Villard will help it once again become a bustling corridor and bring more people to the neighborhood. He said one of the keys to building off that momentum will be collaborations between investors on projects in the area.

“With our project, the new library and the charrette that’s been proposed, we could really see some major progress here if people work together,” El-Amin said.

El-Amin was referring to the Villard Avenue Charette, a community design and development plan created through an intense process involving multiple stakeholders.

Sharpe said she and her team had just completed its final focus group with developers, investors and others working to design the charette when the pandemic shut most things down.

They continued work remotely and in June, the city’s first virtual charette in history was held. During the process, development possibilities for several locations within the BID were outlined.

They used historical and demographic data and years of input collected from residents, business and property owners and other stakeholders to develop a plan for an area with a population of 17,660 and an average median household income of $28,000.

Esswein said developers were mindful of the economic realities of the community, and also the challenge of securing funds for large-scale projects.

“Having a great idea that never gets built is not valuable to the community,” Esswein said. “We wanted to look at how sites could be scalable to accommodate multiple tenants and businesses while still lending itself to larger developments should those opportunities come.”

Amy Oeth, senior planner for the City of Milwaukee, said plans laid out in the charrette tie into the city’s “Connecting the Corridor,” plan, which was created to advance projects and investments in the neighborhoods surrounding the 30th Street Corridor, which intersects the Villard BID.

“We’re hopeful that the ideas laid out in the charette can really move these corridors along,” Oeth said.

Sharpe is optimistic as well.

“People were angry about strategic disinvestment that happened here and how the neighborhood went down,” she said. “Now, people are pitching in and showing love to Villard, and we’re on our way back up!”