You are here: Home / Home / Carousel / African Americans outpace other groups in drug overdose deaths in Milwaukee County
Share this...

For African Americans, this year’s numbers represent a sharp increase in percentage of overall deaths, although it has been trending up for several years. (Photo by Adam Carr)

The number of African Americans who die from drug overdoses in Milwaukee County continues to rise, with Black residents making up 45 percent of this year’s fatalities, according to the Medical Examiner’s Office.

This compares to 43 percent for whites, 6 percent for Hispanics, and 3 percent for Native Americans.  Last year, whites represented 59 percent of all drug overdose deaths in the county, compared with 28 percent for Blacks.

Overall, there were 113 confirmed drug overdose deaths in the county in 2021, with 93 cases pending through May 13, according to data provided by Karen Domagalski, operations manager for the Milwaukee County Medical Examiner’s Office. At the current pace, we could experience a record high of 560 drug overdose deaths this year, Domagalski said. This would surpass previous record highs of 545 in 2020 and 418 in 2019.

For African Americans, this year’s numbers represent a sharp increase in the percentage of overall deaths, although it has been trending up for several years. In 2019, 27 percent of individuals who died from drug overdoses in Milwaukee County were African American, up slightly from 26.5 percent in 2018 and 22 percent in 2017. Those percentages equate to 89 victims in 2017, 102 in 2018, 113 in 2019, 153 last year, and 51 so far this year, with many cases still pending through mid-May.

Unfortunately, those numbers don’t come as a shock to Desilynn Smith, clinical director at  Gateway to Change, a treatment center located at 2319 W. Capitol Drive. Smith, a mental health therapist and substance use counselor, said six people she knows personally have died of drug overdoses this year.

“It’s extremely heartbreaking,” she said. “It started hitting closer to home with the opioids and people still don’t talk about it.”

Smith said part of the problem is the stigma in some parts of the Black community about mental illness and hard drug use as well as a lack of education on opiates. Smith conducts street outreach in high drug traffic areas and said that many of the people she talks to don’t even know how Narcan, which is used to reverse the effects of an opioid overdose, works. 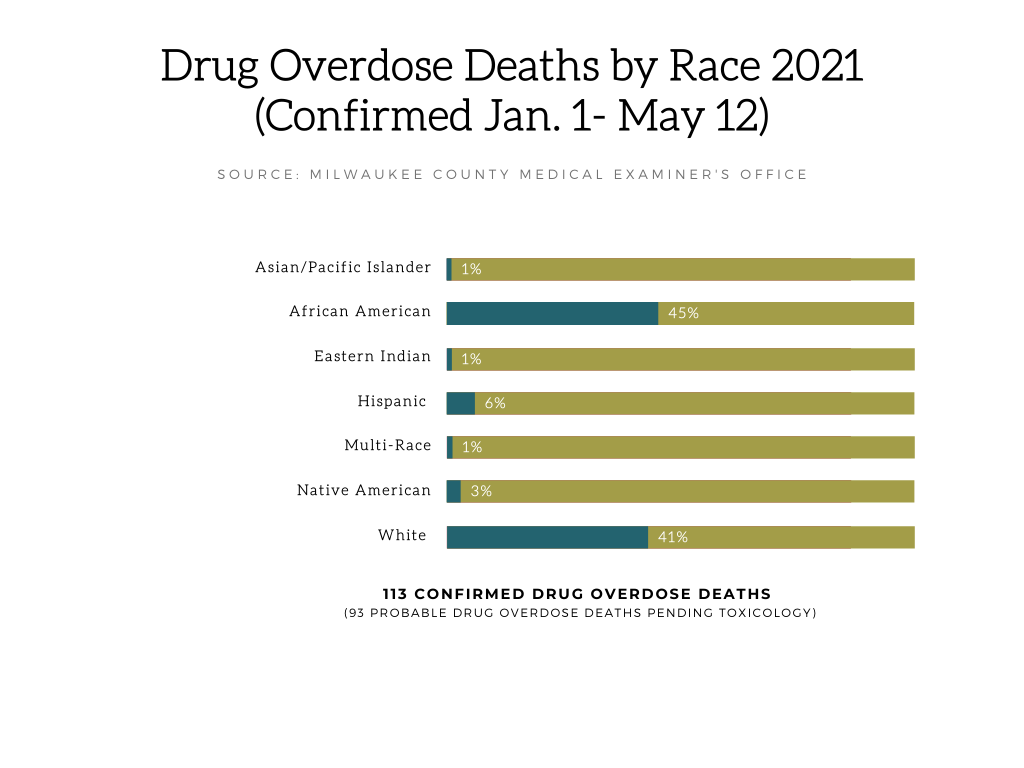 The number of African Americans who died of drug overdoses in Milwaukee County has increased each year since 2016. (Graphic by Dwayne Burtin)

“They thought it was a needle, but it’s a nasal spray. The lack of education some of our communities have about [opioids] is astonishing to me,” Smith said.

Ald. Khalif Rainey, a member of the City-County Heroin, Opioid and Cocaine Task Force who also represents parts of the 53206 ZIP code and other areas of the North Side on the Common Council, said often when he hears from residents about drugs, it’s about rolling drug houses. Few of  those conversations are about drug use and drug addiction, he said.

“It’s really a taboo type thing in our community, especially when you talk about certain drugs,” he said. “I feel like the approach we’re taking now with an opioid conversation, it’s not really resonating.”

Rainey thinks outreach on opioids needs to be more specific to the African American population to raise awareness.

“On social media, young people are talking about perc 30s (30 milligram Percocets) and lean (codeine and soda) and other drugs that are influenced by the culture, by music,” he said. “What [types of drugs] are we doing and how can we be more specific to address that?”

A recent brief from the National Institute of Health Care Management, citing Centers for Disease Control and Prevention data, found that an increasing number of fatal drug overdoses involved stimulants such as cocaine, many times in combination with fentanyl.

In addition, a 2020 report issued by the Substance Abuse and Mental Health Services Administration’s Office of Behavioral Health Equity, foreshadowed the situation in Milwaukee. The report states that the focus on the opioid epidemic mainly centered on white suburban and rural communities, but that Black communities were experiencing dramatic increases in drug overdose deaths.

As far back as 2017, Blacks had the highest percentages of opioid-related overdose deaths and total drug deaths attributed to synthetic opioids when compared with other groups,  according to the report. The report cited stigma around drug addiction, fear of legal consequences and unequal access to treatment as factors in the increase.

Smith agrees, saying people in African American communities are scared to ask for help. She said treatment options in Milwaukee are limited and that individuals are wary of law enforcement, which prevents them from accessing resources such as Narcan and methadone.

“There is fear that our community has when it comes to law enforcement,” Smith said. “One of the barriers in our population is to let them know that Narcan boxes aren’t police monitored.” 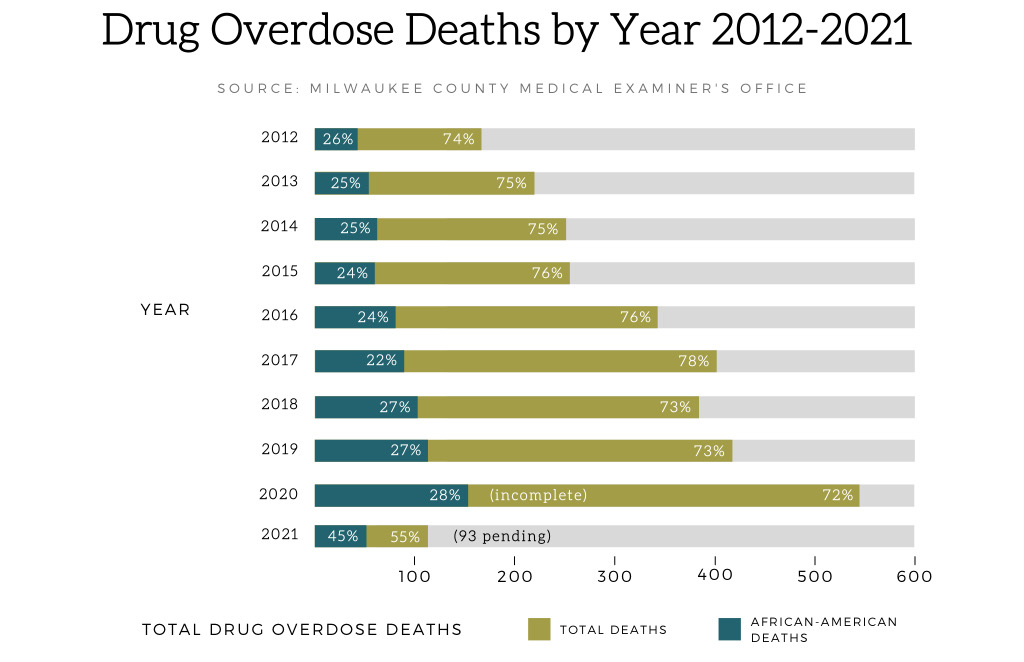 At current pace, there could be 560 drug overdose deaths in 2021. (Graphic by Dwayne Burtin)

Sara Schreiber, forensic technical director of the county’s toxicology lab, said the majority of deaths this year have involved multiple drugs, which, in addition to the lab’s caseload, is a reason why so many cases are still pending.

“The number of substances is always increasing, and we have to determine whether or not they were involved in the death,” she said.

The City-County Heroin, Opioid, and Cocaine Task Force met for the first time in 15 months on May 5. The group received updates on several local efforts to stem drug overdose deaths, including the Vivitrol Program at the House of Corrections. Vivitrol, an injection drug used to treat heroin and opiate addictions, is being provided to some inmates at the House of Corrections before and upon their release.

In addition, he said the  increase of drug overdose deaths among African Americans means more outreach needs to be targeted.

“In this case, I think we need to recognize that a message from one group may not always be resonating with other groups,” Murphy said. “We have to look very carefully how the best messaging would look going forward.”

Help can’t come soon enough for Smith, who said she and her team will work with anyone who comes through their doors.

“We’ll do whatever I can do to assist and get you where you need to go, no questions asked,” she said.

She’s also asking friends and loved ones to watch out for the warning signs of drug abuse, such as missing work and important events, struggles with money and changes in behavior.

Rainey wants the African American community to start talking more about drug addiction and the dangers of opiates.

“If we’re thinking it’s not our problem, then we’re not addressing it and more lives will be lost.”

In case you missed it: Amid surge in drug overdose deaths, City-County Heroin, Opioid and Cocaine Task Force fails to meet