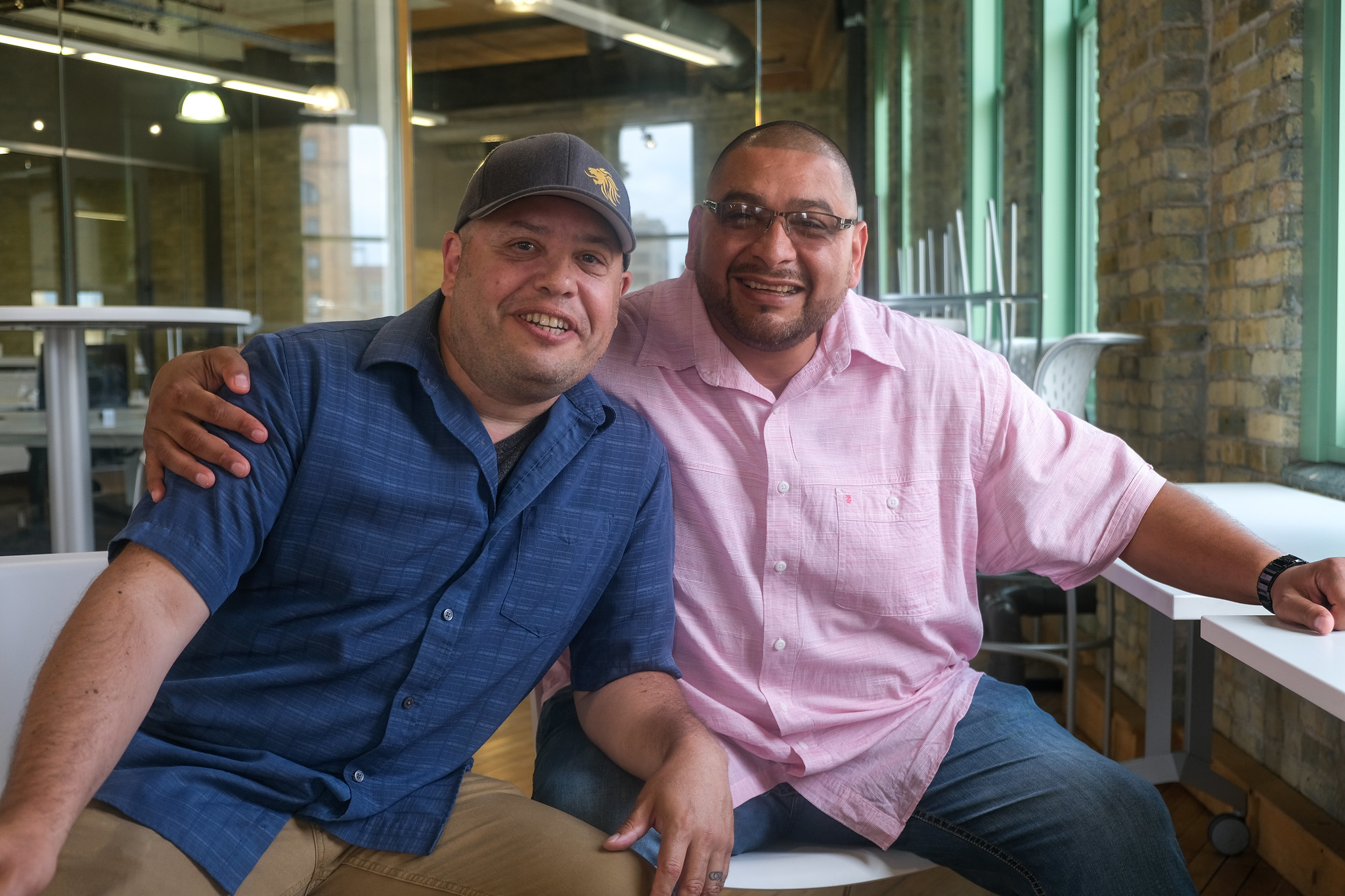 Eli Rivera (left) and Ruben Gaona co-founded The Way Out app to help individuals navigate getting jobs after a criminal conviction. (Photo provided by The Way Out)

Two weeks after being released from federal prison and ready to start fresh, Ruben Gaona made it his goal to become a case manager in 2017.

“I believed in my mind that I had a good likelihood of getting the job with my background,” said Gaona, a Navy veteran.

Although some scoffed at his plans, he was confident, and when he applied for the position through a temp agency, he didn’t hesitate to check the box that said “felon.” But he quickly learned how employment prospects are hindered by that label. Suddenly the position he wanted had a one-year waitlist, and he was steered to a janitorial job that paid $8 an hour.

“I went back to my car and cried,” said Gaona, who knew the job wouldn’t pay enough to  support his wife and four children. “Regardless of our criminal background and what we did, we’re better than what we did.”

Undeterred, he contacted the company directly and got the job he wanted. Gaona would stay there a year before being hired as an employment specialist for the State of Wisconsin. His experiences pushed him to launch an idea that would eventually become The Way Out, an employment app that helps those who have been incarcerated overcome barriers that hinder their ability to turn their lives around.

Eli Rivera, who had also been incarcerated, co-founded The Way Out with Gaona. He, too, wanted to help individuals after seeing so many struggle upon release.

“I saw grown men crying because they couldn’t get a job,” Rivera said. “That stuck with me.” 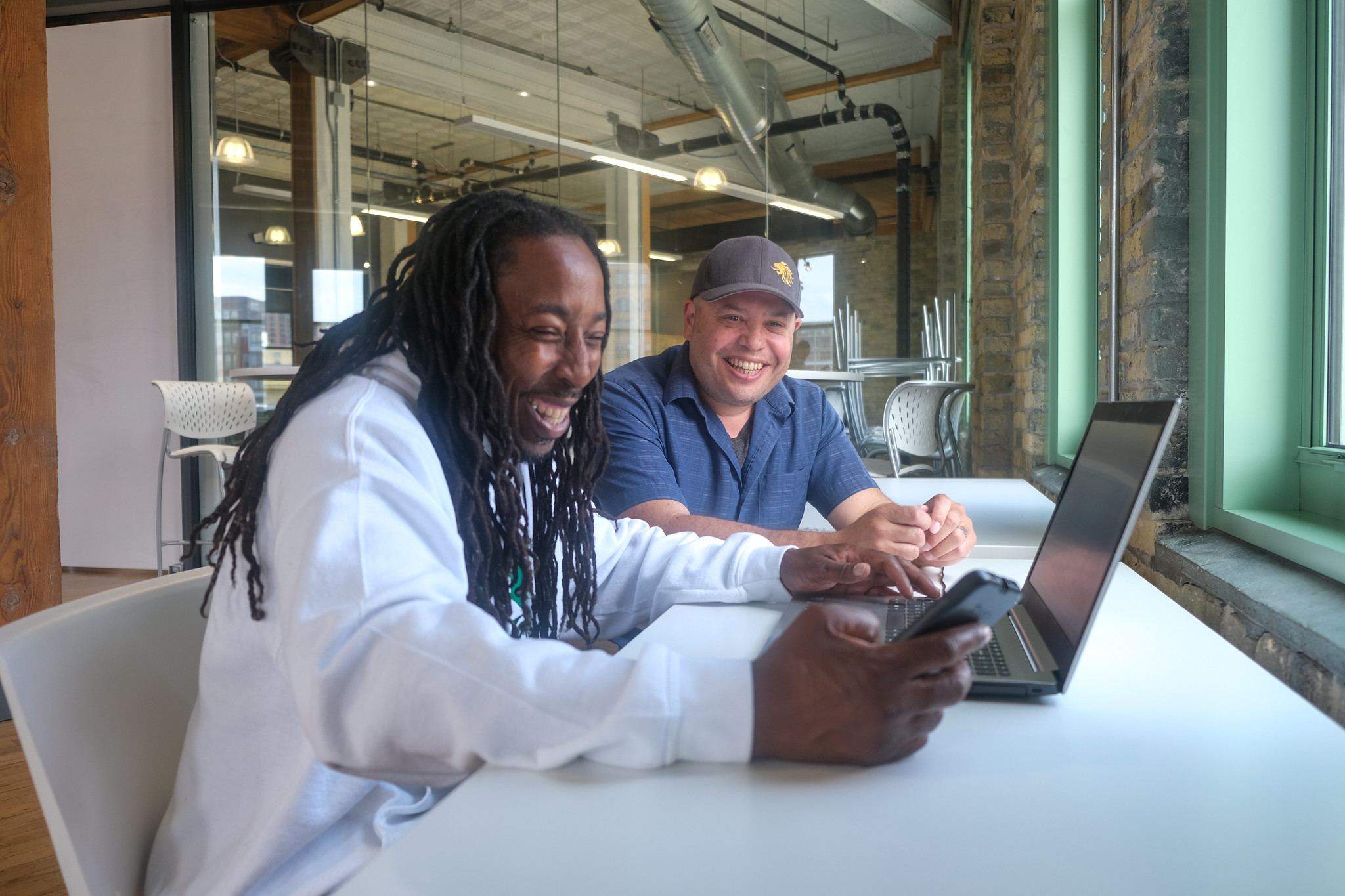 Eli Rivera helps an individual access the online platform. (Photo provided by The Way Out)

Fate brought Rivera and Gaona together at Sherman Phoenix in 2019 during an anti-recidivism event hosted by the American Family Insurance Institute for Corporate and Social Impact. After realizing they had similar goals, organizers paired the two, and their  presentation earned them spots in the institute’s gALPHA and gBETA startup accelerators, which are programs of gener8tor.

“We knew there was something there,” said Nyra Jordan, social impact investment director at American Family Insurance. “We viewed their lived experience as an asset; they understand what the problems are and what the challenges are for justice-involved individuals.”

Taking advantage of the coaching, mentorship, technological and other support from the accelerator programs, the two men launched their website and mobile support app in November.

“We ask: ‘What do you envision your reentry looking like?’” said Gaona, adding that the first priority is to remove obstacles. “Employment does you no good if you’re stressing about child care or other issues.”

Then individuals are connected to services such as housing, transportation or mental health support.  Once their challenges are addressed, they are placed with an employer that has an existing relationship with a local reentry service provider or with a network of employers that partners with The Way Out directly, Rivera said.

“Our only prerequisite is that any employer that chooses to work with us is 100% committed to hiring justice-involved job seekers at a minimum wage of $15 per hour,” he said.

Rivera said  the startup is currently working with 200 incarcerated people who will be released within 12 months. More than 90% of them are seeking employment opportunities, he added.

“We want to get people the resources they need before they are released,” Rivera said. 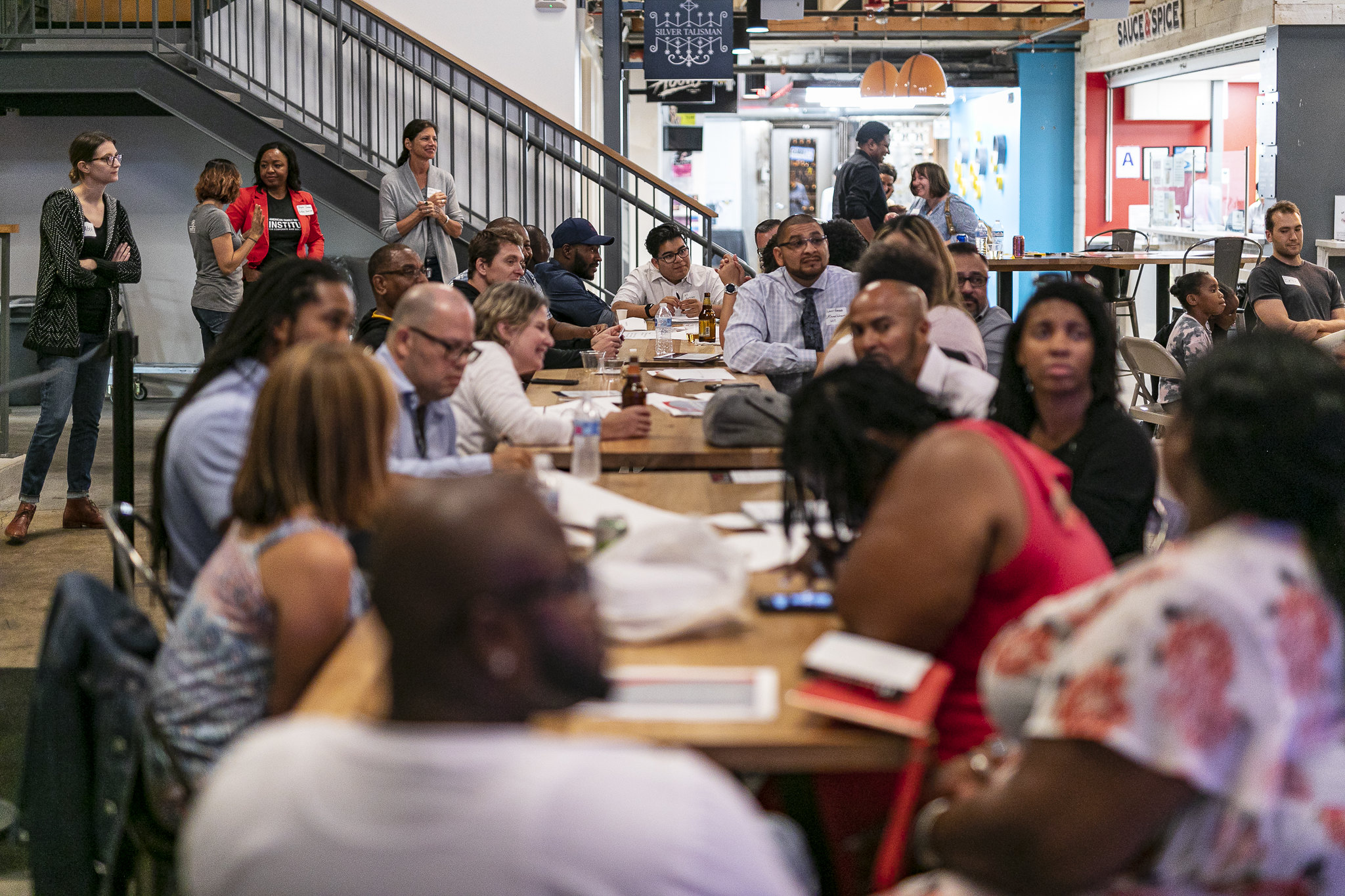 Ruben Gaona and Eli Rivera, co-founders of The Way Out, met during this anti-recidivism event at Sherman Phoenix in 2019. (Photo provided by The Way Out)

Realizing that the issue goes beyond merely helping individuals find sustainable jobs,  Gaona testified recently before lawmakers in Madison about the benefits of Senate Bill 78/Assembly Bill 69. The legislation would significantly reform Wisconsin’s expungement rules and increase the number of people eligible to have their criminal record removed or sealed from databases employers often use during the hiring process.

“People who made a mistake but paid their debt to society are still being punished for the rest of their lives,” Gaona said. “It has a ripple effect all over, not just on that individual but the families and their kids.”

The bipartisan bill was passed in June by a 5-2 vote in the Judiciary and Public Safety Committee. If approved by the full Assembly and Senate and signed into law by Gov. Tony Evers, the bill would still limit expungement eligibility to individuals who have been convicted of nonviolent and low-level crimes. But it would change the requirement that an expungement decision be made by a judge at the time of sentencing and expand eligibility to those ages 25 and older. Expungement means having misdemeanor or nonviolent felony convictions removed or sealed from your record.

American Family Insurance and other organizations, including local business advocacy groups such as the Waukesha County Business Alliance and the Metropolitan Milwaukee Association of Commerce, have come out publicly in support of the legislation.

“For us, it’s about recognizing the power of influence and identifying legislation that aligns with our mission,” Jordan said. “We feel that everybody should have the opportunity to live out their greatest dream.”

Gaona said he and Rivera are committed to helping those with criminal convictions.

“We’re going to continue to learn from those who we serve and keep encouraging people like me and let them know their career and life is not over,” Gaona said.