You are here: Home / "How To" articles / How to avoid fires and stay safe this winter
Share this... 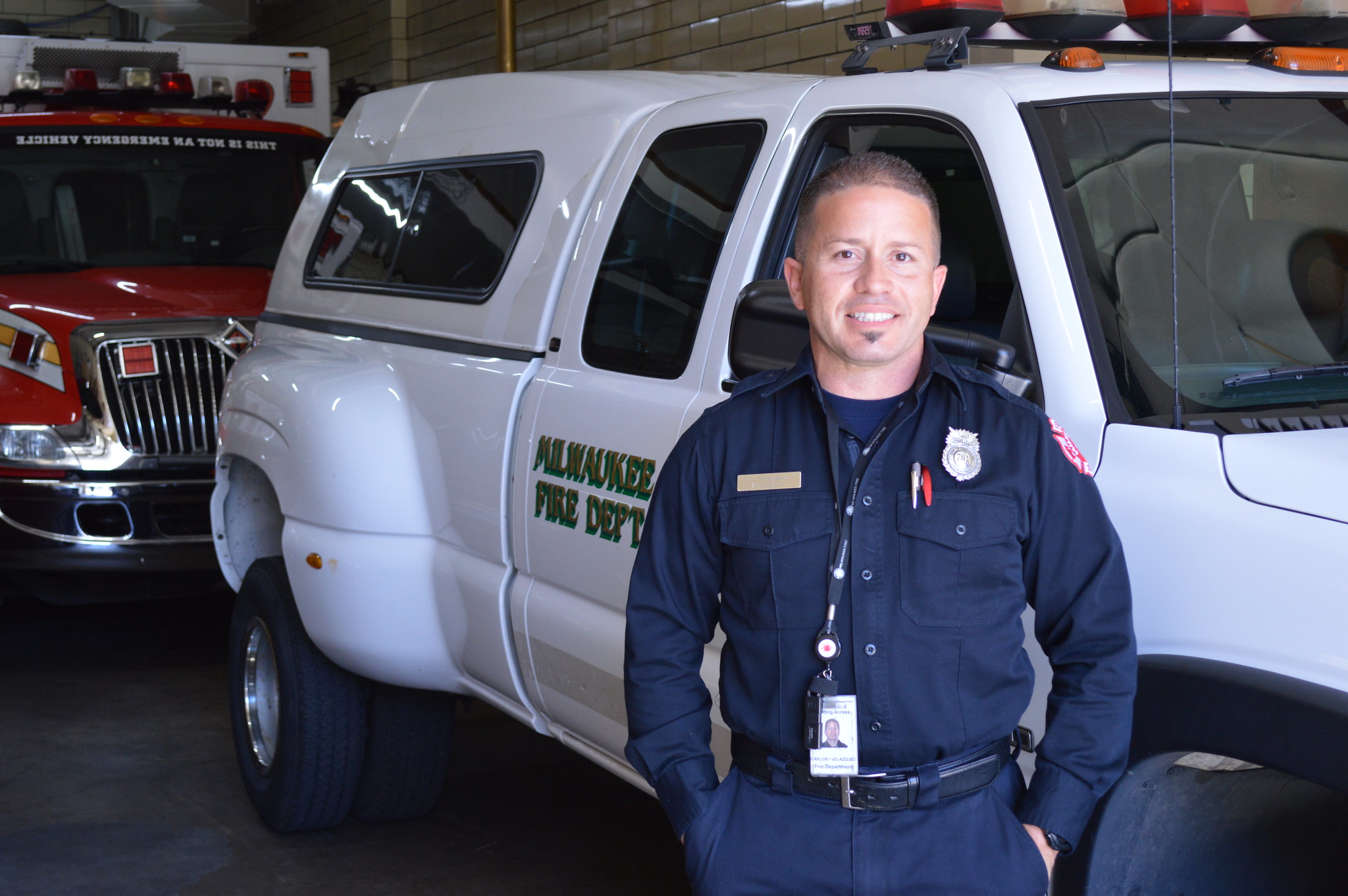 Carlos Velazquez-Sanchez, the fire education specialist for the Milwaukee Fire Department, recommends that every household has an escape route. (File photo by Ana Martinez-Ortiz)

At least once a year, Carlos Velazquez-Sanchez simulates a pretend fire at his house. At the sound of the alarm, his children practice rolling out of bed and crawling to their bedroom door to test if it is hot or not. They then follow their planned escape route.

The simulation ends when everyone has successfully made it to the neighbor’s house – the Velazquez-Sanchez family’s meeting point.

Velazquez-Sanchez is the fire education specialist for the Milwaukee Fire Department. He leads education programs at schools and organizations to spread the word on fire safety.

Below are some tips and advice from Velazquez-Sanchez on how to avoid a fire and other emergencies this winter season.

“In Wisconsin, specifically Milwaukee, our houses are old,” Velazquez-Sanchez said. “Back then, when they built the houses, they didn’t have the need for 30 outlets in every room. There was one outlet if you were lucky, but these days we all need outlets.”

A lot of people use a multiplug, Velazquez-Sanchez said, and then they add extensions to the multiplug, which they often cover with a rug because it looks ugly. The house wires are often old, he said, so when people overload the outlet, it can cause electrical fires.

If there is discoloration above or below the electric outlet, that is an indication that a fire is happening, Velazquez-Sanchez said.

The Fire Department recommends that people touch the mark with the back of their hand and, if it’s warm, call 911, because it is actively burning. If the mark feels cool to the touch still call 911, Velazquez-Sanchez said, because maybe the fire went out on its own but fire travels fast and it could be active in another part of the house.

“We really recommend that people don’t overload their outlets, and to use one appliance at a time,” Velazquez-Sanchez said. “If they need more outlets, call an electrician.”

When it comes to using multiplugs, choose one with a thicker gauge, Velazquez-Sanchez said, and unplug appliances when done.

Be smart with portable heaters

Portable heaters are great, Velazquez-Sanchez said. They are an efficient way to heat parts of the house and can help keep furnace and gas costs down, he said.

The Fire Department recommends plugging the heater directly into the wall and leaving 1 meter or 3 feet of space of clearance around the heater. Make sure nothing is near or touching the heater, including bed sheets, curtains, clothing, towels or anything that could catch fire, Velazquez-Sanchez said.

“When you leave the room, you want to turn them off,” he said. “There’s no sense to have anything running when you’re not there. A lot of fires that happen with portable heaters happen because people left the room.”

The same rule applies to electric blankets. Turn them off when leaving the room or when falling asleep, he said.

“With our eyes closed, we’re not able to see fire,” he said. “Fire doesn’t make a noise. What’s burning is what makes a noise and the smoke from a fire will put you in a deeper sleep.” 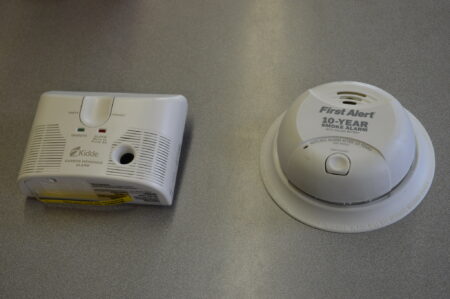 Every household should have a carbon monoxide detector (left) and a fire alarm. (File photo by Ana Martinez-Ortiz)

Be careful with fall foliage

Velazquez-Sanchez advised car owners to be careful where they park their cars. Avoid parking over piles of leaves, he said.

“The catalytic converter is extremely hot,” he said, “It lights up the leaves and there goes your car – it’s on fire.”

A lot of people want to deep fry their turkey for Thanksgiving, Velazquez-Sanchez said. If the turkey has any bit of water or ice on it, it will explode as soon as it hits the oil, he said.

If individuals still want to deep fry a turkey, make sure it is completely dry, Velazquez-Sanchez said, and set up the fryer away from the house.

He also recommends staying by the kitchen when preparing the rest of the meal. The No. 1 cause of fires in the United States is kitchen fires, he said.

“It baffles me because it should be the least cause of fires,” he said. “The problem is we are so complacent, and we are so careless.”

People get distracted by their phones or TVs or they leave the house, he said. Velazquez-Sanchez said there is no reason to leave the kitchen. He added that there should be a 3-foot clearance between the stove or oven and children and pets to avoid potential accidents.

Home for the holidays

It’s a beautiful time of year, with lots of candles and incense, Velazquez-Sanchez said, but a lot of fires stem from candles.

According to Velazquez-Sanchez, Milwaukee’s last fatal fire happened earlier this year in April and cost a 10-year-old boy his life. The fire was started by a candle.

“I understand with the season and the festivities people want to put candles in the windows, but now we have these beautiful candles that look real and all they need is two AAs,” Velazquez-Sanchez said. “They flicker and everything and they last forever.”

If individuals want to use real candles, they should use a candle stand with a heavy base, so it doesn’t fall over easily, Velazquez-Sanchez said, and they should blow it out when they leave the room.

Another sign of the holidays are Christmas trees. People love cutting down their own tree, Velazquez-Sanchez said, but then they don’t water it.

“The way and the speed a Christmas tree starts on fire is incredible,” Velazquez-Sanchez said. “Words don’t really express it.”

All it takes is one little spark for the tree to ignite and go up in flames, he said, so remember to water it regularly.

A lot of people don’t have an escape plan, Velazquez-Sanchez said. Fire doubles in size every 30 seconds, and the temperature can get hotter than 800 degrees, he said.

The Fire Department recommends families create a blueprint drawing of their house.

“Once you have everything laid out, then you want to choose two ways out of every room in the house,” Velazquez-Sanchez said. “After you choose the two ways, then you want to have a meeting place, whether it’s a tree or a light pole or a neighbor’s house.”

Once a household has a plan, it’s time to practice.

In case of a real fire, Velazquez-Sanchez stressed the importance of not going back inside the house for anyone or anything. The majority of people who die in fires suffer from smoke inhalation and not from the fire itself, he said.

The child who died in April had gone back inside to get his dog, Velazquez-Sanchez said, and after reentering the house, the fire had spread and prevented him from exiting the same way.

Velazquez-Sanchez recommends testing smoke alarms once a month and replacing the batteries at least once a year. Milwaukee residents can call (414) 286-8980 for a free 10-year lithium battery smoke alarm, he said.

When using a gas stove or a water heater, make sure the fire is blue. A blue flame indicates a clean burn, he said, if the whole burner is orange that is a sign of carbon monoxide.

Other habits to adapt include cleaning the chimney, not turning the car on while the garage door is closed and closing bedroom doors when asleep.

For additional fire safety tips read: Fire safety 101: The habits and resources you need to survive.