You are here: Home / Home / Carousel / Rotary Club ‘a powerful force for good in the community’
Share this... 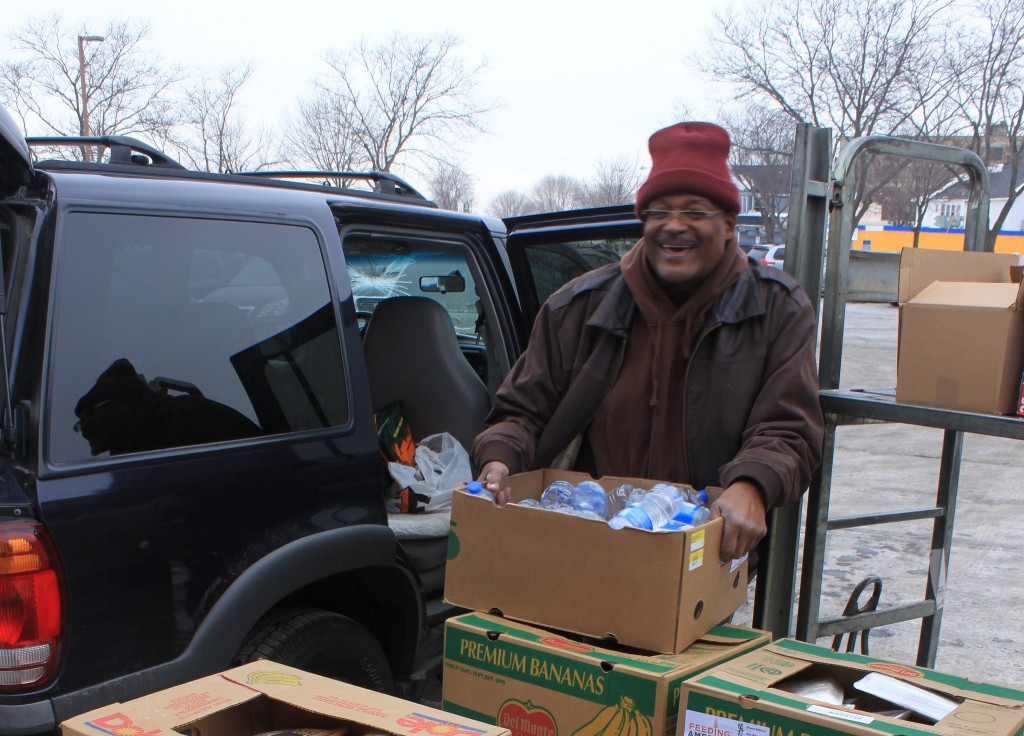 Rev. Isaac Askew of the Temple of the Holy Spirit makes a pickup for his community food pantry at Feeding America, an initiative created by the Milwaukee Rotary Club. (Photo by Matthew Wisla)

Editor’s note: This article is one of an occasional series profiling the finalists for Milwaukee Awards for Neighborhood Development Innovation (MANDIs). The Rotary Club of Milwaukee is a finalist for the BMO Harris Bank Cornerstone Award, which recognizes an organization for its commitment and effectiveness over time.

It was one of those days for Virginia Weissmann. Her household food budget was running low just when the appetites of her three young children were soaring.

“They must have hit a growth spurt,” she said smiling. “I’m usually pretty good at stretching the food in the house, but today …” Virginia, 26, is raising her three children, ages 7, 6 and 1 on a limited budget near the Lincoln Village neighborhood. At times like these, she said, it’s good to have a backup plan.

Robert, 48, is sitting a few seats away from Virginia at the food pantry at UMOS (United Migrant Opportunity Service), a community resource center at 2701 S. Chase Ave. Robert, who declined to give his last name, is homeless and also uses the food bank as a fallback, coming in about every six weeks. Today, he has a taste for chicken. If the food pantry has some he’ll bring it to his mother’s small apartment to cook for dinner.

The number of families at risk of going hungry has grown in Milwaukee since the 2008 economic downturn and remains strong today. “Since the great recession we’ve been forced to expand; demand has been great,” said Charles McLimans, president and CEO of Feeding America Eastern Wisconsin.

Feeding America, launched in 1982 as Second Harvest, is the brainchild of the Milwaukee Rotary Club, Many Rotary members volunteer at Feeding America, pitching in to sort food in the warehouse at 1700 W. Fond Du Lac Ave. in the Lindsay Heights neighborhood.

In addition, the Rotary and its 400 members donate, raise money and volunteer to support a range of projects to alleviate poverty, improve education and literacy, and restore parks and urban wildlife sanctuaries. Rotarians on average volunteer more than 1,000 hours of community service each year.

McLimans, who is a Rotary member, calls the organization “a powerful force for good in the community.”

In 2013, the Rotary opened its Centennial Arboretum along the Milwaukee River north of downtown. The expansive three-year $8 million project encompassed 12,000 hours of effort from more than 2,000 Rotary and community volunteers. The project restored 40 acres of abandoned industrial property back to a natural habitat that includes outdoor learning areas for school groups. It is the only park designated as a U.S. Forest Service Children’s Forest that’s in an urban setting. 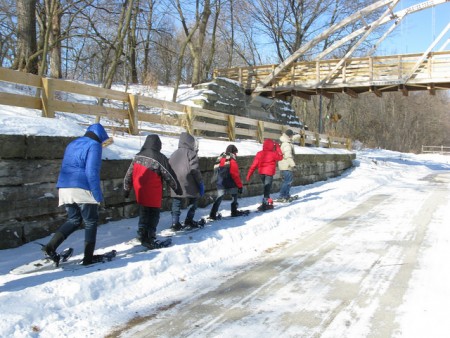 Students from Roosevelt Middle School snowshoe along the trails at the Rotary Centennial Arboretum. (Photo by Kelly Meyerhofer)

“The UWM students work with teachers to plan reading strategies and interventions to make sure our kids get one-on-one tutoring,” said Ava Morris, the school’s principal.

The program has grown from about 30 UWM students three years ago to 50 today. According to the Rotary, recent tests have shown an 83 percent improvement in literacy scores among students in the program.

The Rotary also spearheads other projects at the school. In 2008, the group began a project to restore the schoolyard and playground, which at the time was an expanse of crumbling asphalt and rusty basketball hoops. Coordinating with Milwaukee Public Schools and the Center for Resilient Cities, the Rotary raised about $750,000 to construct a new schoolyard and an outdoor nature classroom. The outdoor center provides learning space for math, science, literacy, stage performances, vegetable gardening and visual art production. The schoolyard also is used by an adjacent Boys & Girls Club and neighborhood residents.

With support from the Rotary, students receive bus transportation to a local YMCA to learn to swim, and field trips to the Urban Ecology Center and other locations where they can go snow shoeing and canoeing.

“They (the students) wouldn’t have had these experiences if it had not been for the Rotary stepping in,” said Morris.

The Rotary also collects and distributes about 10,000 books annually to Milwaukee schools through a Reading is Fundamental program it began in 1974. And the organization raised about $250,000 in recent years for a college scholarship program that helps support 20 Milwaukee-area students. In addition to receiving tuition support, students are mentored by Rotary members for the four years they attend college.

The Rotary Club understands that strong communities contribute to a healthy business environment, said Mary McCormick, executive director. “Rotarians want to make a difference in our communities and for the people who live in them. And there is an awareness that poverty affects the whole community. If Milwaukee is going to grow and be the best it can be then we must address these issues,” she said.

The Rotary has 100 years of history in Milwaukee. In 1915, the organization hosted a Christmas dinner for poor boys who were each given candy, toys, and a bank account with $1 deposited in their names.

Today, the Rotary’s concerns include maintaining Milwaukee’s competitiveness in the global job market and growing the economy. “The need for a strong local economy is a constant conversation within the Rotary,” said McCormick.

Persistence and a knack for forming long-term partnerships are the organization’s hallmarks, McCormick said. On many projects, including the Arboretum and schoolyard at Brown Street Academy, the Rotary identifies a need and becomes a catalyst for additional funding and participation of other organizations, including the Zilber Family Foundation, Honor Flight, River Revitalization Foundation, Milwaukee County War Memorial, Wisconsin Department of Natural Resources – Knowles Nelson Stewardship Fund, Milwaukee County, Milwaukee Public Schools, Milwaukee County Department of Parks, Urban Ecology Center and the Center for Resilient Cities.

The Lindsay Heights neighborhood has become a hub for Rotary involvement. According to McCormick, getting to know the people and partner organizations around the neighborhood helps projects run smoothly.

Standing at the corner of Brown and 20th Streets in Lindsay Heights puts one in eyeshot of Rotary projects at Feeding America, Brown Street Academy and Johnsons Park, 1919 W. Fond Du Lac Ave. The Johnsons Park Initiative includes installing new playground equipment, building an open-air shelter, improving the lighting, planting trees and renovating the sports fields. The Rotary is partnering with the Center for Resilient Cities on the $1.2 million project, which is expected to be completed in the fall. The park is the only public park in the 110-block Lindsay Heights neighborhood.

Across the street sits Alice’s Garden, a two-acre urban farm where local residents learn about growing, cooking and storing healthy foods. The garden was completed in 2011 as part of the Johnsons Park Initiative and was recognized with a Mayor’s Design Award and a MANDI for using public space in a way that “contributes significantly to the overall well-being of the community.”

The namesakes for Johnsons Park, Clarence and Cleopatra Johnson, were business pioneers in the 1930s who made lifelong contributions to Milwaukee’s black community. As a young couple at the Tuskegee Institute they adopted the mantra, “We want to be an asset to our community.” Today, the same can be said of the Milwaukee Rotary Club.