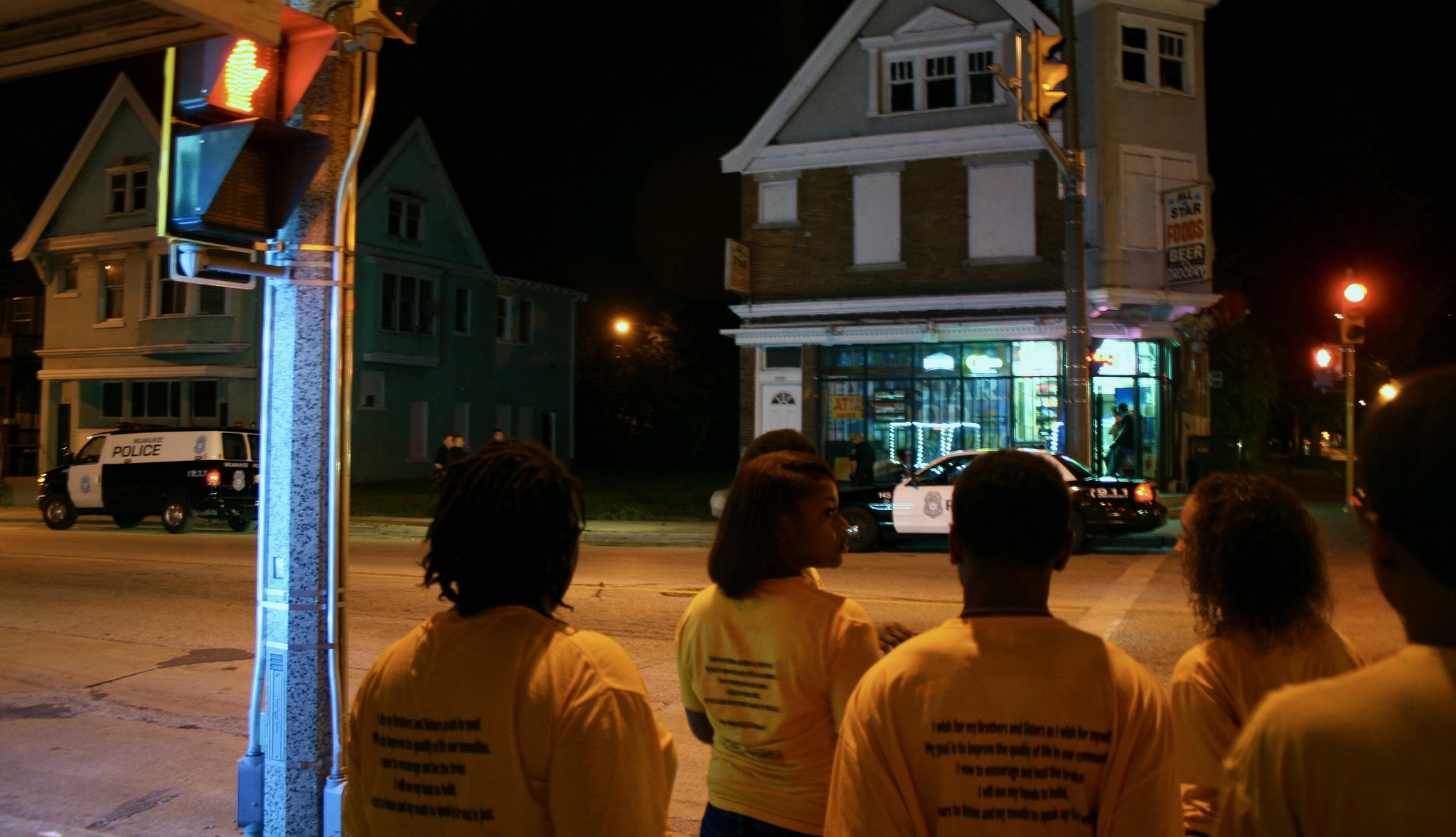 Safe Zones ambassadors stop at the intersection of N. 27th Street and W. Burleigh Street during a patrol in August 2016. (Photo by Jabril Faraj)

Editor’s note: This article is the second in a three-day series about violence prevention efforts in Milwaukee. Part one addressed the federal ReCAST grant to the Office of Violence Prevention.

A comprehensive, citywide plan to address violence has yet to see the light of day, despite originally being slated for release in June.

The process to create the plan was announced by the city’s Office of Violence Prevention last November.

According to Office of Violence Prevention (OVP) Director Reggie Moore, the goal of the “Blueprint for Peace” is to outline “the type of city that we want to have.” He said the plan will outline strategies to create a safe and resilient community, while also addressing how communities are harmed. It will also include implementation of CeaseFire Milwaukee, an initiative of the national Cure Violence model, which detects and interrupts conflicts.

Moore noted that more than 1,000 youth and 1,000 adults contributed feedback through surveys, forums or a few large events that were part of the planning process.

During a Sept. 19 interview, Moore said additional feedback came in during a May event that needed to be included. He added that the plan had been sent to a designer and would be released in October. 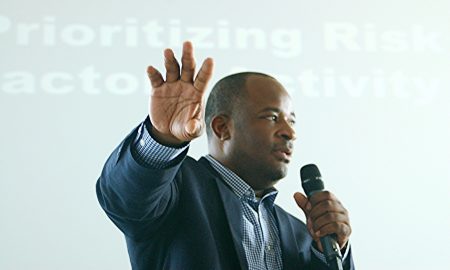 Reggie Moore, director of the Office of Violence Prevention, speaks to community representatives at the launch of the planning process at Discovery World. (Photo by Andrea Waxman)

Moore said that a suicide prevention strategy has been added to the original draft of the plan. He also said that OVP addressed the concerns of a small group of faith-based leaders who expressed that faith and spirituality should be included as factors that help prevent violence.

Dennis Walton, formerly an organizer with the Milwaukee Fatherhood Initiative (MFI), called churches a “fragmented aspect of the community that does not work together successfully.”

He added that the city is in crisis. “The needs are not being met … to address the psychological issues and the trauma that people are facing right now,” said Walton. “We don’t even want to acknowledge how bad it is because then that makes people who are in leadership positions look as though they’re ineffective, which they are.”

There is still no official release date for the plan, according to Sarah DeRoo, spokesperson for the Milwaukee Health Department, which oversees OVP. It is scheduled to come before the Public Safety & Health Committee on Nov. 20.

Donovan wrote, “The lack of leadership and follow through is forcing many families to deal with the serious challenges of unsafe neighborhoods, fueling the flight of middle class workers.”

Nasheka Bryant, deputy chief of the Freedom Fighters, a black-led group that provides armed patrols of city neighborhoods, said the stakes are high. She accused a block of white South Side aldermen, led by Donovan, of attacking OVP and the blueprint for political reasons. These aldermen, she said, do not advocate for the black community and would rather see resources that could help challenged central city neighborhoods directed elsewhere.

“They don’t really care about the violence that’s going on in the inner-city — they don’t,” said Bryant. “They’re just using that as a catalyst to come after the money.”

Donovan, responding to emailed questions, wrote that good public safety constitutes the city’s ability to “restore order and stability … to the level where people can go about their daily lives with minimal problems and without fear of becoming a victim of crime.”

The blueprint is not the only recent anti-violence effort by the city. In June 2016, most members of the Common Council announced a holistic, community-based approach to address violence. The plan was to engage fathers and churches in some of Milwaukee’s most challenged neighborhoods. Several previously approved initiatives were incorporated in the effort.

Safe Zones is no longer in operation after it had issues securing support and the two main co-founders had a falling out. The successful but under-funded Earn & Learn program has seen only marginal expansion. A revamp of the RPP has encountered roadblocks. And the public safety plan, developed in a process led by Donovan, recommended increasing the number of law enforcement officers; it died in the face of public pressure shortly after sometimes-violent demonstrations in Sherman Park in August of last year.

Ald. Chantia Lewis defended the city’s efforts. “It takes a little bit of time and, you know, you will always have critics in the beginning but, once the impact is being felt the work speaks for itself.”

Lewis’ office is supervising a church-based initiative, coordinated by Robert Randolph, pastor of Kingdom Faith Fellowship Church, 4200 N. Holton St. The initiative, which Lewis referred to as “All Things in Common,” employed between 70 and 100 youth over the summer at 10 churches, according to statements from multiple city officials. It was executed in connection with Earn & Learn, a summer youth employment program, and the Milwaukee Promise initiative. Some of the young people employed over the summer secured year-round employment with McDonald’s, though how many was unclear.

The Milwaukee Promise initiative, which received city funding as early as 2014, defined four “Promise Zones” — three on the North Side and one on the South Side. These areas had the highest number of calls for service, violent crime, poverty and concentration of residents with a high school diploma or less. According to Sam Coleman, Common Council President Ashanti Hamilton’s Chief of Staff, partners were identified based on a demonstrated capacity to be effective addressing violence from a public health standpoint. Partners include WestCare, Running Rebels, the Southside Organizing Committee, 30th Street Industrial Corridor Corp. and Employ Milwaukee. The Milwaukee Police Department is also a partner. 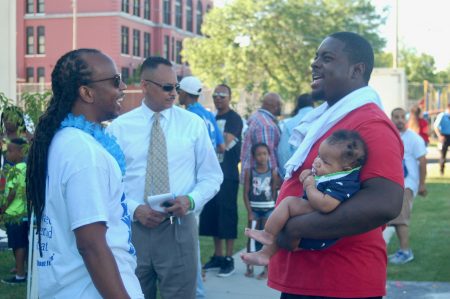 The Promise Zones, which was not originally named in context of the Common Council’s anti-violence efforts, received $470,000 from the city in 2017, according to Coleman.

Coleman said the initiative’s funding will be decreased in 2018.

All Things in Common and the Promise Zones are, effectively, what is left of the Common Council approach, which has “died,” according to Walton.

“There have been a lot of sincere efforts to address the problem, through different organizations and different entities. But I think that those efforts have failed to get to the systemic root of what the violence is in our communities,” he said.

Walton led one of the most visible new initiatives created in conjunction with the Common Council announcement, an effort to engage 500 fathers in Amani to help reduce violence. Walton said the initiative, launched less than a month after the City Hall news conference, was initially successful but ultimately did not receive sufficient support. He left MFI, which was created and is sustained by the city, in June.

Since, he has continued to organize fathers through his organization, Made Men Worldwide, for which he has found support outside of Wisconsin.

Grassroots leaders expressed split opinions regarding city efforts to address violence. Some, including Walton and Program the Parks co-founder Vaun Mayes, criticized the city for not being proactive enough and for not including individuals and organizations they said are most able to address violence at the root. Walton and Mayes are not currently receiving funding from the city.

Others, such as Torre Johnson, who works with formerly incarcerated men and sits on the city’s Black Male Achievement Advisory Council, and Heal the Hood founder Ajamou Butler praised OVP for the work it has done thus far. Heal the Hood and Johnson’s initiatives have received funding from OVP.

Community members have said the definition of public safety needs to change, pointing to living-wage jobs, drug treatment, mental health services and youth programming as ways to effectively address violence. Joblessness, incarceration and a host of other issues disproportionately affect the city’s communities of color.

In the end, Reggie Moore said change will come when the city dedicates itself to a quality strategy, invests the proper resources and creates policies to support it. He acknowledged it is past time to do so.

But, according to Safe Zones co-founder Khalil Coleman, who is currently under contract with the city to help it transition to CeaseFire, “Time is ticking.”

“As we’re waiting, and playing politics, people’s lives are really at stake,” he said. “We’re playing the waiting game but violence waits for no one.”